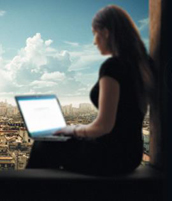 Michelle Obama opens this film saying “These women received deaththreats. They have been beaten, kidnapped, imprisoned, and time and again these women have discovered a very simple truth. That courage can actually be contagious.”

Screened in November 2013 as part of the Northwest Film Center’s Voices in Action: Human Rights on Film series, “Forbidden Voices” examines the ways three women protest oppressive circumstances in their countries. You would guess that my writing partner, Ardelle Anderson, an 87-year-old wise woman, would be just as supportive as the First Lady. But she’s not.

Before her complaint is explained, here’s a summary of the film’s content.

The stories of three women are interwoven, like alternating pieces in a colorful quilt, reflecting the new millennium’s phenomenon of third world women rising from oppression and disregard. A new self-confidence and courage is afoot. All three ground-breakers are bloggers and all three are subjected to government retaliation.

The first, Yoani Maria Sanchez Cordero, is from Cuba. Time magazine named her one of the 100 most influential women in the world in 2008. She is celebrated as a freedom blogger in a country with the lowest Internet access in the world . In the film there is the report that private Internet connections are prohibited. However, private enterprise in Cuba is not completely extinct. Hotels offer Internet connections to those who will pay.
Cordero’s blog gets one million hits a month. In the doc she was drumming up popular support for the plight of jailed Guillermo Arinas, a journalist, psychologist and critic of Castro’s regime. He was on a hunger strike in attempt to force Castro to release 26 ailing political prisoners.

The second woman is Farnaz Seifi and she is from Iran. She explains that when the Islamic revolution happened women lost all of their rights. “Women are now considered half of a man. In a car accident, if a man’s genitals are injured there is compensation that is more than if a woman is killed.” She writes about feminist issues and the headscarf: “It’s not important what is on your head, but what is in your head.”

The third woman is Zeng Jinyan, a Chinese national who writes on topics that are taboo in China: human rights, pollution and AIDS.

Questad: Ardelle, with so much female fire power, why aren’t you overflowing with appreciation for this film?

Ardelle Anderson: I went to my dictionary to look up propaganda for this one. Originally it was a church term related to spreading the faith, working for the propagation of a particular idea or doctrine. Now the term is often used in a derogatory sense, connoting deception and distortion. This film certainly falls into the second category for me. It was a rehash of old news, badly organized, and a call to protest.

Questad: I know you are well-read, well-traveled and have had relatives working in developing countries. Your son volunteered for two years in Liberia with the Peace Corps and others close to you have worked in various religious and humanitarian organizations in the poorest parts of the globe. Don’t you support the protests of these women?

Anderson: Of course, I have sympathy for each cause, but I would much rather see a documentary showing both sides of the issues. I would like a real discussion that could result in some real change. I think people’s time and energy would be better spent in working within the power structure or alongside it in trying to affect change. Go for the positive, not the negative.

Questad: To match your dictionary use, I looked up documentary. Merriam-Webster says a doc employs documentation that is factual and objective. However, the problem with this doc as well as other documentaries coming out these days is that they are really docu-mercials. They are propagating only one side of an issue, as if they were trying to market a belief or brainwash the viewer into one perspective.

Anderson: I think they are made to manipulate emotions. Propaganda has neither interest nor value for me.

The bottom line is that both Ardelle and I agree that the most powerful documentaries are those that abandon polemics and at least offer the audience the facts with as many points of view as possible. If a film is one-sided we have an intellectual yearning and curiosity to hear the opposing side of the issue. With this frustration unresolved, whether sympathetic to the cause proposed or not, we have difficulting supporting the case presented.