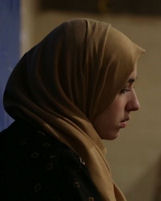 Two rabbis organize a supportive, protective chain outside a Brooklyn mosque where Muslims come to pray each Friday.

Touched by their connection to a heritage of suffering, Rabbi Sharon Kleinbaum and Rabbi Marisa Elana James, along with congregants from Congregation Beit Simchat Torah, have come here every Friday afternoon since the 2016 election.

“American Muslim” is all about what it is like to be a Muslim in New York City, specifically in Brooklyn. Crowds of people are pictured with signs reading “Trump Won Get Over It,” “I’m an American Dump DACA,” “Muslim Ban!” and “F*** Islam.”

Gender-United Leaders
Three men and two women are followed in this mosaic of news and interviews. They encourage and nurture the spirit of their Muslim community. A tenant in Islam is charity so an obligation of a Muslim is to give back. Their religious leaders arrange projects like giving an abandoned woman and her children a furnished apartment and rent for six months.

Kobir Chowdhury, who came to the US in 1991, is a Bengali-American and president of the Al-Aman Mosque. Kobir also helps run a Community Help Desk that provides translations, helps with taxes, and distributes immigration information and referrals to lawyers and agencies.

Misconceptions
Many people equate Arabic-speaking people as Muslim, but a surprising number are Christian. Khader El-Yateem, a Lutheran pastor and Palestinian-American, is interviewed as he runs for a seat on the New York City Council.

Though there are restrictions on women in some Muslim countries related to government impositions, not Islam, wearing the hajib in western countries is a choice and way for women to publicly proclaim faith and community.

Community Practice
The Islamic day of worship is Friday, the singular weekly holiday in many Muslim countries. In the evening most Muslim men report to their local mosque to pray. In “American Muslim” the Muslim leaders arrange to use a community sports court to hold their Ramadan prayer. Though the first-generation Muslims in Brooklyn are from all over the world, their religion ties them together.

Unintentional Film
Adam Zucker, award-winning editor and filmmaker, wasn’t planning on making this documentary. After being shocked over the 2016 election, he just wanted to get out and meet some Muslim-Americans. On his own personal investigation, he was a one-man crew.

His Director’s statement reads: “After meeting many individuals and visiting numerous mosques I did my first shoot in January, 2017, the day after the inauguration. I rode along on a chartered bus to Washington for the Women’s March with a group of Afghan women, most of whom had never participated in any kind of political action before. A week after that, the first executive order of the Muslim ban was issued, and protests exploded across the city.”

Zucker filmed for the next 18 months, getting to know Muslim-Americans and capturing the history of the time. “American Islam” had its US debut at the San Francisco Jewish Film Festival and was recently screened at the 2019 NYC Documentary Film Fest.