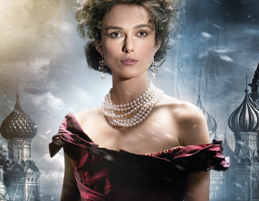 Part dance-musical, part Monty Python farce, part Shakespearean rendition on the “All the world’s a stage” theme, part melodrama and then a dollop of realistic tragedy makes “Anna Karenina” one ambitious experiment in art. But would Leo Tolstoy like it?

With such artistic experimentalism, the director and actors seem confused about how to play this classic struggle of class, passion and vanity. At one moment there are dancers in exaggerated costumes and actors stamping documents in sync – as if this is a comedic musical. In another moment Anna, played by Keira Knightly, throws her arms around herself and looks skyward in dramatic isolation as the rest of the set disintegrates. In still another example of confusion we see a horse race where the horses race right onto the stage and one falls off. Crippled, his rider must shoot him.

An actual theatrical stage is used to portray a play version of “Anna Karenina” in a film – but then the stage suddenly transforms into a seemingly on-location setting. Without warning we are back on stage again, this time with an audience – but, oh, wait, the actors are in the audience, too!

All that might have worked except for excess. In addition to the environment, there are the transitions in genre. The actors don’t seem to be sure what tone or style to take, so they experiment in different scenes – their choices not always coinciding with each other.

The one good leading performance is by Domhnall Gleeson (Bill Weasley in “Harry Potter”). His characterization is realistic throughout, allowing him to establish Levin, the farmer, as stability the audience can understand and respect.

The rest of the roles, in a grand experiment of artistic freedom, were miscast, misdirected and absolutely mis-created.

I’m not saying that acclaimed writer Tom Stoppard and already accomplished young director Joe Wright were barking up the wrong tree. Baz Lurhman tried to do something very similar with his 1997 “Romeo and Juliet” tragedy, complete with the stage concept and some re-writes in the dialogue to exaggerate the humor. It’s just that Lurhman was able to pull it off with the greatest rendition of “Romeo and Juliet” ever produced on stage or screen and Stoppard/Wright have cake on their too-much-like Monty Python faces.

“Anna Karenina” is a subject for a passionate dance, extravagant sets and costumes. But it needed filmmakers who also paid attention to a story – whether it be Tolstoy’s version or Stoppard’s. There was just never anything there to engage the audience.

Anyone who’s read “Anna Karenina,” and I read it once at 15 and again at 40, will be disappointed.