On the surface, Robert Gordon’s and Morgan Neville’s documentary “Best of Enemies” is about a series of nationally televised debates in 1968 between the liberal Gore Vidal and the conservative William F. Buckley Jr. As it turns out, there is a lot more to this film than just the supremely entertaining rhetorical battles being waged on screen. 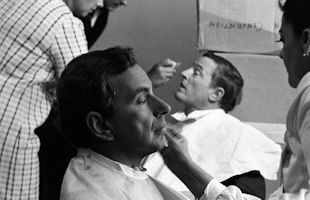 As the film tells the story, Vidal would seem to have been the most exposed. Taking the debates very personally, he was never so interested in debating issues as he was in destroying Buckley. Although, in the end, it seems to have been the conservative who was most traumatized by the live televised arguments.

The back story is that the ABC television network was seriously behind in the poles, running a distant third CBS and NBC. ABC needed a serious shot in the arm and came up with the debates. They had no idea of the pot of gold that awaited them. The film interviews the most noted historians, political theorists and communications executives about the watershed event that forever changed broadcast news.

Interspersed with these interviews and the priceless recording of the actual debates is archival footage of controversial leaders and their pundit counterparts. In 1955 Buckley founded the conservative weekly magazine “National Review” which became the voice of the Republican Party. In retrospect Buckley, close to both presidents Nixon and Reagan, laid the foundation of the conservative movement of today.

Although both men were from well-to-do families, Vidal rejected the standard Ivy League mold and even refused to attend college. He went on to publish bestselling novels including the outrageous (for its time) “Myra Breckenridge” that was made into a movie. The outrageous journey into the transgender reflected Vidal’s own complex sexuality. But it was not his possible gay orientation that enraged Buckley, it was Vidal’s refusal to admit to or confirm any sexual orientation at all. He excited the loathing of the right while giving them little real target to attack.

The debates took place during the 1968 presidential election conventions. The democrats in Chicago and the Republicans in Florida, so there was plenty to talk about. The Viet Nam war was raging and leaders such as presidential candidate Barry Goldwater advocated using nuclear weapons there. Civil rights activism was reaching critical mass and age old sexual mores were being rewritten overnight. This provided the fuel for the debates, but it was the toxic personal enmity between the two men that sparked the flame into a red-hot cauldron of personal insults and near physical battle to the set.

This is debate as blood sport and the editing and synchronization of the footage is critical. This film comes through loud and clear on all levels. It is a great history lesson of one of the most challenging times in America’s history. Even more importantly it shows the downward spiral that accompanies the hubris of the gifted. The punishment for not knowing one’s limits can be crushing.

It was the best of times and, well, you know the rest. Be a part of a little bit of the barely controlled chaos of the ’60s and see this film. 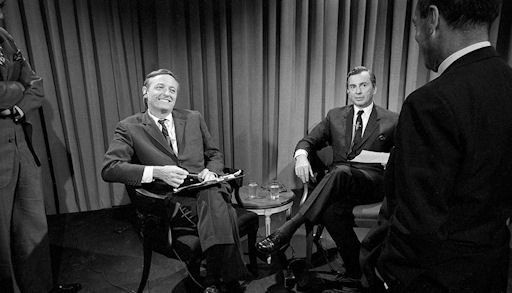