The great thing about Nicolas Cage’s bad movies is that he seems to be having such a good time making them it becomess infectious. Screened at Fantastic Fest 2018 in Austin, the genre non-busting B movie “Between Worlds” is no exception. Even better, this flick has Franka Potente who proves completely capable of giving everything back to Cage that he dishes out. Plus some, at that. 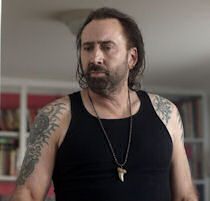 Anybody who has seen the uber-indie classic “Run, Lola, Run” knows Potente was doing extreme weirdness back when Cage was plodding along with “Snake Eyes.” In this film, he is required to show real emotion, which is hard for any actor. Reduced to basics, he carries it off in his own style, at least not making a mockery of the part. As trucker Joe, his non-stop drinking shtick does not hold a candle to his rock-bottom defining portrait in “Leaving Las Vegas.” Forgivable, since this is a sci-fi flick and not about the slow death of addiction.

In this yarn of spiritual possession his main job is a bitch-slapped “gee whiz” look, reduced to a sanitized alky expression. Potente is loaded with the heavy lifting, as her character Julie has half a clue as to what is going on. The twist in the plot is even though she thinks she is using her special power in the right way, things will go terribly wrong. The bottomless fountain of angst, Cage gets to act out Joe figuring out, like every noir male hero, he has been taken for a ride.

Breezing in and out of the story is hilariously understated nurse Astrid (Gwendolyn Mulamba). She intercedes to give us a clue about the process of the other-worldly travel, but only serves to make the story murkier. In the end, she is telling us something we need to know, but could not possibly make out at that point in the plot anyway.

So emerging writer/director Maria Pulera has pulled the wool over the eyes of the characters, as well as us, the audience. Fair enough, but perhaps the spirits themselves need to do a little more talking, just to help us understand how severely messed up the situation is. Joe, of course, ends up just as messed up, and that is what Nikolas Cage is good at.

If the film is a mediocre thriller, it tells the story straight and makes use of genuine acting and plot instead of plugging in buckets of blood, sound crashes, fist fights and car chases to take up screen time. The possession scenes are not over wrought. There is no barfing or contorting. The few physical interactions are realistic, leading to nothing. Joe is a drunk, but the story does not become about him and his addiction, but about his guilt and his past mistakes coming back. When his goose is cooked, he knows it. As it should be, when the bad spirits, or the IRS, come a-knocking, they come quietly. 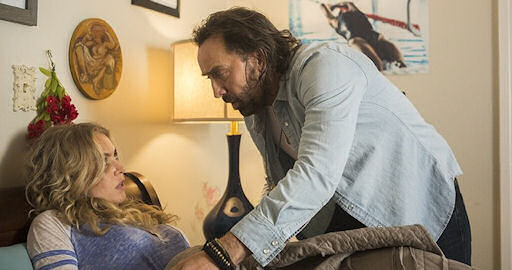