Review: The Old Man and the Gun

An actor with a career of the monumental success of Robert Redford has a lot of good work on which to expand. The old fashioned flimflammery of “Butch Cassidy and the Sundance Kid” and its companion piece “The Sting” fit tightly with the genre of his latest movie. Less obvious might be his powerful performance in “The Natural,” the film about the baseball prodigy who cannot seem to do anything else right. 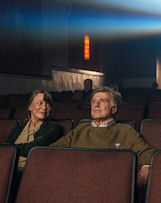 Such was the real-life story of Forrest Tucker. Although he successfully pulled off dozens of thefts and robberies, he is best known for the 18 that sent him to jail. These are his best stories, because he escaped from prison 18 times. If he was a good bank robber, he was a legendary escape artist. In a sense, he had the best of both worlds. He managed to rob banks without (as the story is told) ever hurting anyone. He had plenty of money and then when he was caught, the fun really started. He was able to match wits with the prison system, and, for the most part, walk away with first place.

Even though he doubtlessly had some serious mental issues, Tucker was comfortable in his own skin. This is something that might appeal to Mr. Redford, who has, doubtlessly, seen his share of successful show business personalities doomed by their success. Perhaps this role, possibly one of his last, is his inching towards messages that he wants to leave with his gigantic viewing public.

The most important of several solid supporting roles is nailed by Casey Affleck, the small-town cop who adopts Tucker as his own special project. If Redford can draw upon his award-winning rascal-charmer roles, Affleck is able to call upon his gut level accent, phrasing and spoken rhythm that coalesce into pure liquid Americana. When he wears cheap suits, hick ties and a bad haircut, you know that millions like him, who made America, had to be doing something right.

Sissy Spacek, Danny Glover and, of all people, Tom Waits round out a sterling cast, although the “Catch Me If You Can” charm is 100 percent down to Redford and Affleck. Spacek is a natural. Born in Texas, she does Oscar winning down-home even better than Affleck. It is great to her again after ten years without many marques. She is looking good, too, although her trademark nose looks much too much like Michael Jackson’s after his last plastic surgery.

Tom Waits fits right in, too. His real-life quirkiness and the prodigious irregularity of his acting resonate with the real-life eccentricity of Tucker. Emerging director David Lowery (“A Ghost Story”) is backed by a platinum crew with every available cinematic award weaving through their work. Lowery and several of the producers worked together on “Ghost Story.” There is great potential in this team to produce strong films long after the stars of this movie have retired.