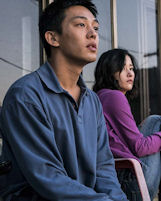 Three people form a modern love triangle echoed in the cold city streets of Seoul. The farm boy falls hopelessly in love with the girl from his home town, now compromised by the overwhelming modernity of the big city. The city boy has made it big but has somehow traded his soul for his wealth. Billed as a mystery thriller about the girl’s disappearance, the story is about the mystery of what will happen to humanity when the only light we see is what is reflected off the symbolic Seoul Tower.

Jongsu has left his abusive father on the family farm some years earlier. He identifies himself as an unpublished writer in a nation of skyrocketing unemployment and lives in the city on odd jobs. His father, marginally insane in the wake of his wife’s estrangement some years earlier, is headed for prison after a legal trial of stubborn humiliation and disgrace. Haemi picks him up wandering through his new life like a lost dog. Although almost incapable of love, he responds to her entreaties and falls in love with her.

Legendary director Chang-dong Lee gives us Haemi as a dream from the start. Jongsu has fallen in love with half a person. In Haemi’s tiny room she tells him as much, pointing out that she only gets sunlight once a day, from light reflected off the Seoul Tower close by in the bustling tourist district. She takes a trip to Africa and returns with Ben, a local with a telling western name who is wealthy beyond explanation. As the three enter a hazy, dreamlike relationship, Haemi fades from view.

As his vision fades, it is not clear if she was real at all, or Jongsu’s illusion of what life should be. His identity as a recorder of events is contrasted to Ben’s mover and shaker; his farm truck constantly juxtaposed with Ben’s Porsche. Long takes of slowly changing scenes take us deep into the firmament of the urban landscape. Intellectuals comparing notes about foreigners cuts to Ben “explaining” things to his callow counterpart and then to Jongsu’s work on the farm. Ben is on a journey but it is not until the end that we know the destination.

A superbly crafted film of Pacific rim neorealism, multiple award-winning performances by Ah-in Yoo (Jongsu), Steven Yeun (Ben) and Jong-seo Jun (Haemi) rivet the focus to the everyday places and events that make life good or bad. When Haemi asks Jongsu to take care of her cat that he never sees she is telling him that he does not really see her either. She is his vison of romantic love in a world where such things do not exist for long. Ben scoffs openly at love, too openly to be fooling with the country boy. He is not mocking him but welcoming him to a new life. It is left up to the viewer to decide if that new life is worth it. 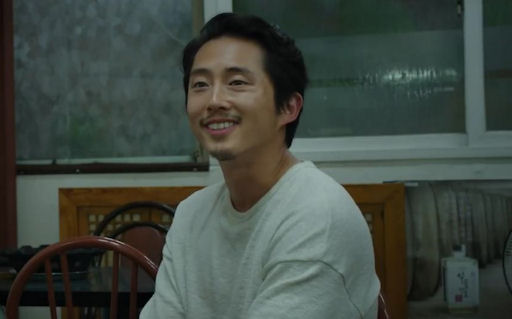