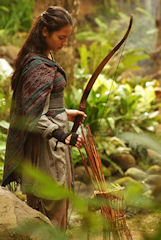 It is a bad day for Sultan Hamza, the noble warrior and wise leader of an indigenous population in 1800’s Java. Dutch Captain Van Trach (Reinout Bussemaker – possible Oscar nomination for best slavering, demented corporate colony lackey of 2019) finds the Sultan and executes him in the most slavering, demented way, kicking off a revenge flick that finds a life of its own.

The wise sultan’s even wiser brother Arana escapes with the sultan’s two sons, Jamar and Suwo (Ario Bayu and Yoshi Sudarso). Huck Finns who fight like Bruce Lees, plus they have guns. And what marvelous guns. Not just automatic weapons, they have grenade launchers, tank penetrating rounds and compact thermonuclear cruise missiles (just kidding about that last one). Anyway, they are going to find Dutchy, put his finger in the dike and blow the dam (figuratively speaking).

Writer/director Mike Wiluan (co-written with Raymond Lee and Rayya Makarim) presents this hackneyed story is a wonderfully fantastical way. The grenade launchers are quite a bit ahead of their time, as is the American Wild West mis-en-scene. The movie rockets through every Hollywood western trope in the book; a virtual parade of ridiculous, USA home grown western fantasies. The Butch and Sundance redux is prominent, especially in the opening fight with aptly named Brute (possible Oscar nomination for Conan Stevens for best slavering, demented, ex-pro-wrestler and just plain, well, brute). The good guys win and ride off into the sunset, headed for home sweet home and sweet revenge.

That’s the last we see of America; the rest is yeasty old Java all the way. Ok, it is not really that yeasty. The fighting Hamzas always have hair like George Clooney, even after they have been shot a few times at close range. Blood flies freely, mostly in extravagantly choreographed sword fights, yet the gore is more virtual than real. Bad guys flop over and that is the last we see of them. Screen death and on to the next bit part getting one’s head lopped off. The good guys, like John Wayne, shrug off the grenade wounds like so many bug bites.

Local village lass Kiona (Pevita Pearce) turns out to be Annie Oakley, who can put a bullet or an arrow through a parrot’s top knot at a hundred paces. Unfortunately the screenplay fails to make use of her, dropping her out of the significant action. She would have been especially exciting during the final “Wild Bunch” slap down. But that was not to be.

The production is as glossy and spotless as a Bollywood musical but the film makers cannot decide if the film is to be heroic or campy. So it does not walk the fine line and much as it bumps back and forth, like the faux Sergio Morricone music that pops in and out. Neither a campy parade of martial arts or a swinging spaghetti western. 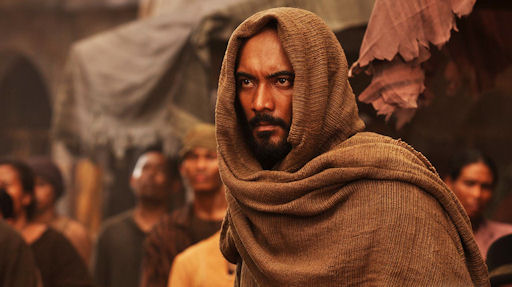