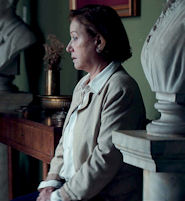 An aristocratic couple grows up with the freedom to live outside societal norms in traditional Paraguay. As their money runs out, they are forced to gradually reenter a stratum of society they thought they could leave behind. Caught in social and legal currents they cannot control; Chela and Chiquita will have to move on in ways they fear and distrust. Paths that will turn out good and bad.

Marcelo Martinessi’s slow burn slice of life takes two women out of time and turns the microscope on their personal crises. The two have been romantic partners for decades, and rich for their entire lives. Now, they must sell off their possessions, some personal treasures they cannot imagine living without. Chiquita, the most grounded and assertive of the two, sells what must be sold, while Chela lives in a fantasy world of denial that is always a few steps behind reality.

The screenplay slowly introduces Chiquita’s impending jail sentence and the lesbian orientation of the two. This subtly blends the distinction between punishment for legal violations and punishment for social violations. She exclaims to a friend in disbelief, “They are going to put me in jail!” Unbelievable, after all, the rich have their prerogatives.

As reality dawns on Chela, it dawns on us. Chiquita is in and out of the courts while Chela is in and out of consciousness. Martinessi plays with these themes accompanied by suitably subdued cinematography and a soundtrack alternating between the vaguely threatening and the downright melancholy. Many of the scenes are in the decrepit mansion, slowly becoming a shell of itself. Richly photographed, the interior is as dark as the inner reaches of the mind. Perhaps this is the cocoon from which Chela, at least, will merge reborn. She first drives her (still rich) buddies to various social meetings as a favor, and then, when pressed, as a paid taxi driver. Her shock at actually working for money is as funny as it is pathetic. In that melancholy, she is emerging and learning things of importance, despite herself.

She makes up a ludicrous story about Chiquita’s sudden absence from her normally vigorous social circuit, a story that cannot help but fall apart in a short time. She is learning about truth and lies as she is learning about taxi driving. She is also learning about finding new lovers, a skill Chiquita seems to have long since mastered. Chela may be slow, but, after all, it is Chiquita who is in jail.

This is the film debut for both Ana Brun and Margarita Irun, who are accomplished Paraguayan stage actresses. Their method is slow and exacting, at least by American movie standards, but filled with a share of dark humor. This works well for the subject matter in this movie. The trick will be to transpose it to future films. Considering the film is Paraguay’s official submission to the 2019 Academy Awards for Best Foreign Language Film, it is exciting to anticipate where we will see Brun and Irun next.