A great documentary takes on a life of its own. By the end of “Charm City,” it is obvious that to write this as fiction would be impossible, this is a screenplay written by those who know. There is no middleman, the viewer is in a world that few could ever imagine. This story has been dramatized on the TV series “The Wire,” but this is the real deal, the unadulterated inner city of America. No simple stories, no simple causes and no simple answers. 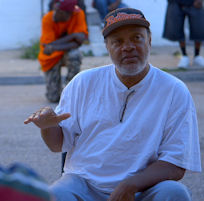 In avoiding finger pointing as well as punditry, Marilyn Ness’ chronicle features citizens, police, and government officials struggling to control the deadly fallout of the decaying inner city. The setting is Baltimore in 2015, a time of unparalleled violence in the city. The worst thing about the senseless death, which had become an almost daily occurrence, is that there is no single, defined cause. The factors are as obvious and as documented as they are intractable.

Military weapons on the street are part of the equation. Add to that a fundamental lack of respect for life that thrives in an environment that drains self-respect. When society tells people they are worthless, they believe others are worthless as well. Death becomes a solution to minor problems from which normal people simply walk away.

Clayton “Mr. C” Guyton founded the Rose Street Community Center in the heart of the toughest neighborhood in Baltimore. He recognizes that city police and social work are not coming close to addressing the problems of the inner city. Each neighborhood needs to accept the challenges and each person must take personal responsibility to understand the guy next door. This powerful movie shows that the energy Mr. C is putting into the area is working. The question nobody wants to address is why others are not doing it and who will do it when Mr. C is gone.

Alex Long has lived his life on the streets. Alex has been on his own since his father went into prison when he was six. He has no alternative to Rose Street but prison. Even so, he is one of the lucky ones who sees that only by helping others can he help himself.

This film is made up of the stories of persons like Mr. C and Alex. There does not seem to be any prepared script. Director Marilyn Ness, (“Camera Person,” Trapped,” “E-Team) filmed the citizens of the streets as they wrote the script. It is not as much a screenplay as it is the story of hundreds of lives. As the film shows, those lives are liable to be cut short at any time, for no reason.

Camera work took place over a period of three years, during a particularly sharp spike in homicides. As the scenes shift from police to social workers to local organizers the message is that few people are getting the message. The entire structure of the personal relationships is cracking at a fault line. A small minority see the way. The question is how to get more power into those hands and take power away from the drug and gun dealers who profit from any escalation in violence.

Smart enough to stay away from easy answers, only movies like this tell the real truth. Yes, it is worse than you thought.

Tags: Marilyn Ness
Posted 13 May 2018 by Ron Wilkinson in Reviews