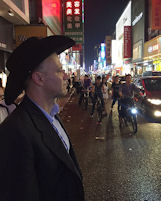 A stranger in a strange land sees gold nuggets falling out of the sky. The cowboy puts on his hat and rides for the horizon, horse and camel. The Ghost Box is the key. A strange, inexplicable black box that talks to the spirits of the dead while warding off malevolence from beyond. A great idea, if you can sell it, and Jimmy Van Horn thinks he can. After all, China is nothing but America on commercial steroids.

David Zellner does the heavy lifting and has the most time wearing the removable teeth. Specialist pops in and out, guiding the way through the labyrinth that is Chinese wealth production politics and co-writing with Zellner and director John Maringouin. Robert Longstreet plays local fixer Bob. Jimmy parachutes in with forty thousand in euros and makes a big splash. Well, he makes a splash, a local investor tells him. But, after all, the two hundred Russian models cost all of that. What about tomorrow’s party?

This is the big leagues, the fast lane, where inventions are reverse engineered, stolen, bootlegged and sold for pennies on the dollar, making millions for Chinese insiders. Jimmy’s contacts toss around a couple of ideas for stealing the idea and selling it to the rubes, one of a dozen scams America feeds them every day, no better, no worse. Jimmy’s problem is that those circuit boards being reverse engineered are, in fact, his brain. The more he tries to sell, the more of him ends up in a clean room robot on the bobble head assembly line.

Coming to re-colonize China with the most inventive scam since the fortune cookie he finds the patsy, all right, and those giant gerbils are not a hobby. The man behind them has a level of obsession that Jimmy cannot even approach. He was so obsessed with making money he had himself photoshopped into his own wedding. The gerbils are the remains of the last Texans to stake out Shenzhen as their own private Ponderosa.

The invention gone, along with the $40k, Jimmy transcends being a cowboy acting like an inventor to simply acting like a cowboy. “Put some emotion into it,” his boss tells him, as his last bit of identity is drained and his self-worth sinks below sea level. This is going to be a hard sell and there is little he can do to satisfy the monster he has courted.

His local handlers tell him to straighten up and “get a good job. There are many.” A mysterious master controls the future he seeks, but Johnny Mai Thai (J.R. Cazet) is more of a spirit than a man. Jimmy’s box has been transformed into something to ward off bad spirits and has probably already been denounced as a fake and dropped in favor of the next big thing.

One of the most inventive flicks of the year, the non-linearity is kept under just enough control to keep the story from dissolving into nonsense. Good cinematography captures the good life that average people think rich people enjoy. As the good life dissolves into the mirage Jimmy either finds what he wants or realizes freedom is, after all, nothing left to lose.