Hello, my name is Jessika and I am an addict. What am I addicted to? My Funko Pop collection is evidence of my obsession over all things pop culture. “Ready Player One” ambitiously wants to appease said obsession. Film, television, music and game references litter the world that is “Ready Player One” and I approve. 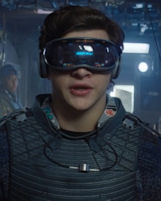 Based on the novel by Ernest Cline, “Ready Player One” takes place in a future that sees society in a dystopian state. Wade Watts lives in what is known as “the stacks” in Columbus, Ohio. “The stacks” are literally mobile homes stacked on top of each other. Society is in a recession-like state and humanity escapes into the world of OASIS, a virtual reality experience that people escape into.

The world of OASIS is the product of James Halliday and Ogden Morrow who have a complicated history. When Halliday passes away, he leaves a mass video telling the player of OASIS that he has hidden an Easter Egg somewhere inside the virtual realm, and in order to find it one must first complete three hidden challenges which when beat will bestow a key to the player. The finder of this Easter Egg takes control of the OASIS and inherits Halliday’s fortune.

So what is OASIS? It is a virtual world that is oozing with all things pop culture. Halliday was a pop culture fanatic and players in his world can customize everything from their looks to their vehicle to their hangout location. The pop culture is oozing out of every orifice of this film. The film is based on the novel by Ernest Cline and there are a vast amount of differences between the two, including certain references, but the heart of both is the wonderful homage to all things that make up pop culture. Cline not only wrote the novel, he was also involved in writing the screenplay and for that reason I find it silly to compare the two as the creator gave his stamp of approval on both.

Steven Spielberg, who directed “Ready Player One,” and Robert Zemeckis have a history together. Spielberg was an executive producer and Zemeckis the director on “Back to the Future” and so it comes at no surprise that “Ready Player One” has many references to “Back to the Future,” with my favorite being a Mayor Goldie Wilson poster. When watching the film and trying to spot as many homages I could, I asked myself, “Wow, how did they get the licensing requirements for all for all of this stuff?” The answer is, of course, Steven Spielberg.

I could go on and on about this film but what it comes down to is whether I would recommend it, and the answer is yes. It is a yes, but not for the reason of it necessarily been a great film with solid character development and complexity. The answer is yes because there is just so much to discover in virtually every frame of the film.

I have seen the film twice now and it was for that reason that I went back for a second helping, to find the sprinkled goodies throughout the picture. The re-watchability of this film is unlike anything I have seen. Every time you watch it, it is guaranteed you will spot something for the first time. Go see “Ready Player One” on the big screen, it makes it easier to spot the hidden gems. It’s visually awesome to look at and the soundtrack sets the mood throughout. 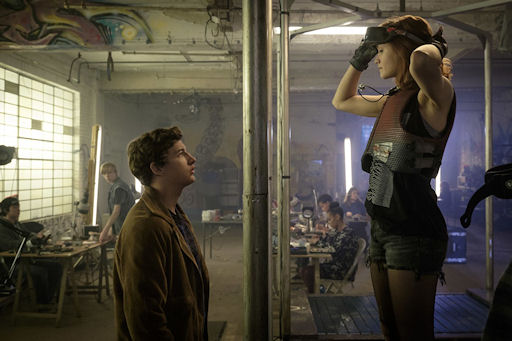