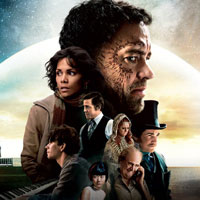 “Cloud Atlas” takes the writing/directing team of the Wachowski siblings (“The Matrix” trilogy) and pairs them with “Run Lola Run” Tom Tykwer to bring to life the novel by David Mitchell and turn it into a major blockbuster film. “Cloud Atlas” takes multi-layered stories and mixes together six distinct storylines and fills the senses with massive scenes and themes that focus on the choices we make and that every action we take cause a ripple effect throughout time.

While the style in which these stories are told can be complex and overwhelming at times, it is the general sense of awe and amazement that pulls these many talented actors and actresses together to form a story that is impactful and unique. It transcends any one particular film genre in an attempt to create something wonderfully amazing. “Cloud Atlas” is a very ambitious movie that will not be for everyone, but it should be experienced by everyone.

Since this is such a complex film, I will break it down as simply as possible, without giving away the details or any possible spoilers. “Cloud Atlas” is in fact six separate stories that take place in different times, on multiple continents and involve many different themes that happen to flow together in the end to form one stream of consciousness and one ultimate lesson to be learned.

In each of these tales, we meet a multitude of characters (played by the same ensemble of actors) each of whom cameos in the majority of the other stories as different people. Each separate story is only partially told and then we move onto the next, where they help finish telling the rest of the previous storyline.

The different narratives can be broken down to this: an American notary traveling on the Pacific Ocean; a young musician tasked with transcribing the humming’s of an accomplished 1930s composer; a journalist in the ‘70s investigating the dubious workings of a California nuclear power plant; a publisher in 2012 who has a run in with the mob and is then forced into a retirement home; a clone in a near future who decides to rise-up against her enslavers; and a far-off post apocalyptic future where mankind has rescinded back to near a primitive state and one man must help a woman from an advanced race look for answers to her many questions.

This all might seem so very complex, but as you watch it you keep up with all of the characters and eventually you do get so invested in the excitement, heartache and peril you are watching onscreen that you forget about the constant jumping back and forth and start seeing the similarities and parallels between them.

As each story comes along to its own arc, a net of cosmic reasoning and significance begins to appear and you can see that our lives are not our own, we are all connected and every action has a ripple effect on the rest of time. When we make choices between cruelty and humanity, cowardice and bravery we not only shape ourselves, but we help shape how the future will be.

With a cast consisting of four Oscar-winners and many other talented actors, this incredible undertaking by these three brave filmmakers has not only set the bar high for this upcoming award season, it has created a movie that will be discussed and debated for a long time. While it does extend its reach at some points, and some might find it a bit pretentious in the grandeur it seems to bath itself in, “Cloud Atlas” is a work of art that takes remarkable actors and pushes the boundaries of age, race, sex and language to create entire new worlds, recycling these veteran actors and seamlessly blending them all together with the use of award-worthy makeup, costuming and special effects.

Since this is an ensemble film there is no clear-cut star of the film, but some of the main actors are Tom Hanks, Halle Berry, Jim Broadbent, Hugo Weaving, Jim Sturgess, Doona Bae, Ben Whishaw, James D’Arcy, Susan Sarandon, Keith David and Hugh Grant. With the majority of the actors playing upwards of six separate and distinct characters that change age, sex and even race, there are sure to be many awards nominations coming to this cast. The make-up effects should be a guaranteed Oscar nomination as sometimes you don’t even recognize the actors in some of the stories. Don’t worry, at the end of the film they do show you every character that each actor played in the film, which will have you and your friends astonished at the ones that you missed.

So you may still be asking yourself if you should go out to see the movie, even after reading this review, and my answer to you is that yes you should. Even if you don’t fancy yourself a film buff or think that you will be able to keep up with the complexities of the stories and themes it encompasses, the epic feel, fast-paced nature and the comedic and serious tones of the film make it an event that must be experienced at least once.

As Tom Hanks said in an interview about the film when asked what audiences should do to prepare for the film: “Let it wash over you, forget everything you have heard. It is just one movie about six people; it’s not a test. You just need to dive in and enjoy the beauty of it.”

“Cloud Atlas” is in theaters now and is rated R for violence, language, sexuality/nudity and some drug use.