Review: Come As You Are 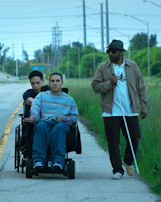 Richard Wong’s feel good breakout movie turns the road trip on its head. Three disabled men team up with a traveling nurse to escape their parents and find America. Rather, they want to escape America and find Canada, specifically a brothel specializing in those with disabilities. Erik Linthorst’s screenplay has its high points in laser guided statements about helicopter parents and the universal nature of the human spirit. If you got it on, get it on.

Adding another brick to the wall of recognition of the disabled, Wong starts off the movie with three typical mornings in the lives of the protagonists. Although the plot’s outward focus is sex, the three anything-but-normal days set the agenda for the rest of the movie. These men are different than us, but they are like us. As quadriplegic Scotty (Grant Rosenmeyer of “The Royal Tenenbaums”) wakes, he finds the usual problem, a gigantic erection that he cannot control. Normal enough, they go away, but never fast enough when one wants them to.

Scotty’s nurse sets the tone for how people should react to others with disabilities. She does not react at all. It is just another day, the perception of difference is in us, not them. In a sense, Mo (Ravi Patel) and Matt (Hayden Szeto) have it worse. They live with attentive and, understandably so, over-protective parents. As loving as the day is long, the parents are making the worst mistake of all, which is to not let their children make mistakes. The disabled make different mistakes, and they can be worse mistakes, but the incarcerating alternative is worse.

After the initial introductions of the leads, the story moves to a paraplegic baseball game. This is the opening for Asta Philpot, the originator of the idea for the original 2011 movie, to plant the seed of the mystical Canadian brothel. Like Curt of “American Graffiti,” the possibility of love appears to the three at first as a mirage. Could it really happen to them? Do they want it to happen to them? It is up to the director and screenwriter to show us how much of a profound disability is mental, and they do it.

The three are slow to grasp the potential of unlocking the door to their own private prison but unlock it they do. Their getaway van is piloted by a marvelously cast Gabourey Sidibe as Sam the traveling nurse. Sadly, this movie is no “Precious,” but it is a start, and it is good to see Ms. Sidibe again on the big screen. Acting out their real lives in a 24-hour run from their parents, there is a lot of growing up that happens in mid-movie, but sounder heads prevail (the moms as opposed to the dad) and the three men get the blessing they deserve.

A poppy soundtrack and rapping with attitude move things right along and there is even a bar fight with funny, if not overly realistic results. Teetering on the camp, the film pulls through. The “Wizard of Oz” ending is sweet and has a poignant twist. This is a coming of age story on several levels. 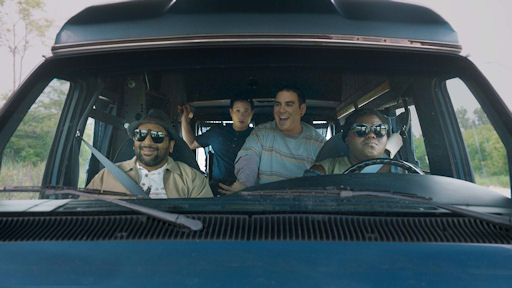