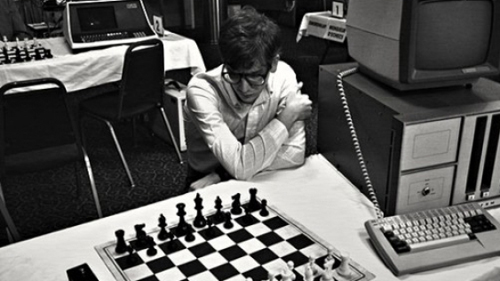 Did underground indie writer/director star Andrew Bujalski set out to make a tedious and irritating film on purpose, or did it just turn out that way? A flick with moments of genius, most of this movie plays like Andy Warhol’s spectacular “Sleep,” which consists of his close friend John Giorno sleeping for five hours and 20 minutes (just kidding about the “spectacular” part).

Yes, there is a flicker of greatness here and there. A glimpse of the angst, fear and alienation that comes with being very smart and very obsessed with something the rest of the world could not care less about. Computer chess. Although many viewers will walk into the theatre thinking this is a documentary about the early pioneers of AI (artificial intelligence), it is not a doc. It is a scripted and acted work of narrative fiction. Director Bujalski loves to use amateur actors, or non-actors, in his films to lend them freshness and spontaneity. But that only works when the screenplay has life. The audience has to work hard to keep cooperating with the joke in this one.

Patrick Riester, in his acting debut, plays Peter Bishton, the highlighted student nerd of the film. In the course of the movie, Peter goes from a semi-insecure graduate student working on the bleeding edge of computer programming to a completely insecure adult. He has not only been subjected to the most recent of what apparently has been a long track record of losing, but he is now subjected to a private encounter session. The session, which is one of the high points of the film, has two older pioneer New Agers offering to help Peter get in touch with his private self. If you know what I mean.

Scary as that would be, it showed Peter that there was, actually, a world outside of artificial intelligence. Maybe that feeling that came over him during the computer linking with fellow computer ace grad student Shelly Flintic was not just coincidence. 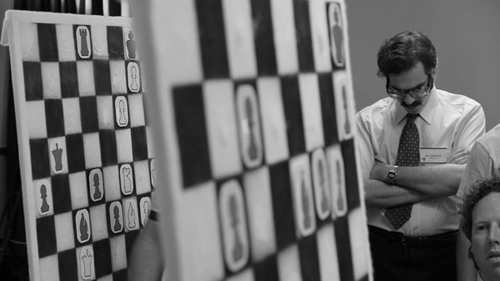 Robin Schwartz steals the show as grad student programmer Shelly Flintic. Shelly is Peter’s female counterpart. Each is so naïve, insecure and uncomfortable in their own skin as to scare the cats out of any room they enter. When Peter is so desperate to find out why his computer is losing all the time that he begs for a collaboration with his competitor Shelly, the resulting unification of the two machines approaches the orgasmic (OK, you have to use your imagination).

Myles Paige plays accomplished scientist and computer mentor Michael Papageorge. Papageorge has made the mistake of forgetting to make reservations at the hotel that is the chess tournament venue. Unfortunately for him, but fortunately for us, the hotel is also hosting a major encounter conference at the same time. Hence the aging New Agers.

As a result, Papageorge cannot get a room and finds his egotistical self trapped in a limbo of homelessness, walking from room to room and begging for a place to stay. Like all nerds, he is roundly rejected on all fronts and finds himself in the kind of endless loop computer programmers dread. He is condemned to the purgatory of the hotel, repeating his knocking and rejection into infinity, until he is finally reduced to sleeping on the floor of the tournament room itself. Paige acted in Bujalski’s “Funny Ha Ha” but is not a professional actor.

Set over the course of a weekend tournament for chess software programmers thirty-some years ago, Computer Chess transports viewers to a nostalgic moment when the contest between technology and the human spirit seemed a little more up for grabs. We get to know the eccentric geniuses possessed of the vision to teach a metal box to defeat man, literally, at his own game, laying the groundwork for artificial intelligence as we know it and will come to know it in the future.

For all you actual chess players out there, heed this warning. This film has nothing to do with chess and virtually nothing to do with computers. A disappointment for nerds everywhere, this is a boon to everybody else. Unfortunately, in spite of the lack of boring technology, film maker Bujalski manages to make a boring film. Many in the audience might actually become interested in chess, or computer programming, as their stimulus deprived minds search for excitement in this glacier script.

See this film if you think it sound as if it has cult classic possibilities. Not likely. Or, rent Warhol’s “Sleep” and try not to sleep through it. The choice is yours.