Growing up, I was not a fan of the horror genre at all. My family never watched anything scary, so when I would experience these movies at a friend’s house it was extremely scary to me. Now, as an adult, I find it hard for movies to actually scare me and it takes a lot for me to get sucked into a horror film.

We have seen a resurgence of the genre as of late — not of the classic slasher films of the ‘70s and ‘80s, or even the monster movies that ruled the ‘50s and ‘60s, but an all-new paranormal genre that holds out on showing you what you really want to see and then gets its thrills from the audience when they finally reveal the poltergeist or evil entity.

Director James Wan (“Insidious,” “Saw”) has made a name for himself in the genre and is back at it once more with his new film, “The Conjuring.”

Based on true events, “The Conjuring” takes us back to 1971, when real-life paranormal investigators Ed and Lorrain Warren begin to investigate a claim from the Perrons, who are experiencing some odd and terrifying experiences within their new home. While Ed and Lorraine travel around teaching lectures on the subject, they also talk about how many of their investigations lead to practical solutions for weird noises and things moving around the house, a cold breeze and so on. However, there are times when they legitimately come into contact with objects or people that are possessed or haunted by spirits or demons, and they have to deal with those. When their job is done, instead of discarding the objects that have the evilness attached to them, they keep them locked up in a museum in their house to guarantee that these items never fall into anyone’s possession where they can do harm ever again.

Roger Perron (Ron Livingston) is a father struggling just to provide for his family. His family — wife Carolyn (Lili Taylor) and daughters Andrea (Shanley Caswell), Nancy (Hayley McFarland), Christine (Joey King), April (Kyla Deaver) and Cindy (Mackenzie Foy) — has just moved. The children are the first to begin experiencing the phantom anomalies, but when Roger and Carolyn also witness something, it is then that they seek out the ghost-detective couple.

While Ed (Patrick Wilson) is the leader of the team, it is his wife Lorraine (Vera Farmiga) who has the gift of seeing and feeling the apparitions. Each time she comes into contact with a hostile spirit, it drains her and the effects stay with her. While they begin to look into the history of the house and the surrounding area, they uncover horrific tragedies that have plagued the land ever since the Salem witch trials. One thing is for sure, there is malicious energy surrounding the family and unless they can prove to the church there is a threat here, they will not be able to get a sanctioned priest to the location quickly to help exorcise the house, and the poor Perron family will not last much longer without intervention.

I rarely really excited for new horror films (for the reasons I stated above), but months ago I read that the M.P.A.A. rated “The Conjuring” R for pure terror and not for the typical violence, gore or language — and that had me really intrigued. I went into the film expecting some great scares and while it is a very suspenseful film and uses mental horror, I did not find myself truly scared. I am not talking about the typical “jump scares” you get when a door slams or a shadow rushes across the screen to a loud sound effect, but a true horrifying experience.

I will say that the movie builds up the suspense for nearly the entire film, usually hiding from the audience’s view what the characters are seeing and I really like when films don’t give it all away at the beginning, but once the reveals began to happen and all of the apparitions appear I felt like I was watching “Insidious” again. Not that it’s a bad thing, but what they did and how they portrayed the ghosts has been done before.

Yes, the movie’s events are based on true stories — Ed and Lorraine were the pioneers of the modern ghost hunters and all of that is really alluring — but from a horror standpoint I felt that when the film finally began delivering on what it was teasing the entire time all I got was very generic scares, especially if you have seen Wan’s previous films.

The movie was written by Chad and Carey Hayes (“The Reaping,” “Whiteout”) and while it may not be just the script’s fault, the film’s effects and overall tone went from feeling original to a carbon copy of things that have come before it by the end. I liked the use of the music and the sounds to enhance the thrilling moments, but I felt let down with the overall film. I let myself get excited for a movie that I thought could be truly original and maybe even give me nightmares, but I left the theater and just moved on to other things. In my opinion, that is what makes a great film, the ability to get you to think about it and even debate what things meant with your friends well after you have left the cinemas.

The acting and dialogue are decent. I have loved Vera Farmiga ever since she was in “Up in the Air” and Patrick Wilson is good, but I felt his character was too close to his role of Josh in “Insidious.” I was really impressed with the family dynamic between all of the Perron girls, and it was nice to see young starlets like Joey King and Mackenzie Foy break away from their recent supporting roles in blockbusters and go for something different.

I do consider “The Conjuring” to be superior to the latest series of “Exorcism” films that hit theaters or DVD shelves every few months, but I felt it was just too similar to Wan’s previous work. Those who are really into these types of films, or maybe haven’t seen all of the films James Wan has done before, might find the film scary or original, but for me I think it was just a passable endeavor with few memorable moments that will live on past when the theater lights go up.

If you are looking for a positively alarming experience, you may want to pass on seeing this in theaters and maybe wait until another film comes along. 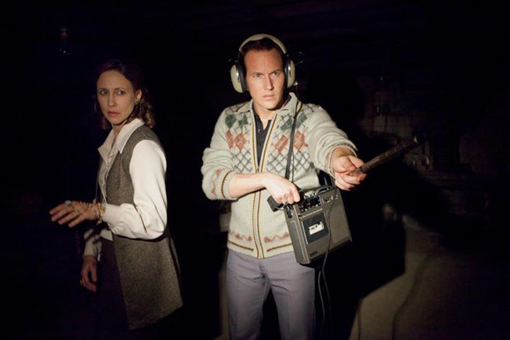