Director Charles de Lauzirika’s atmospheric thriller aims to get at what makes us tick; those countless, terrifying moments that we live with all of our life. These are the moments when we should have done something, but did not. These are the lost opportunities that fill our lives with misgivings. Lives saved, people comforted, strength and courage shared. Putting our lives at risk so that others can life. Those moments.

Or, possibly, they are times when our better judgment prevailed and we failed to act for the best of reasons, which is why we are still alive and not a couple lines in the evening Times. We never know the truth, so we worry.

Aiden (Josh Lawson) worries a lot. As a professional photographer whose livelihood is photographing mangled female victims of sex crimes he has plenty of opportunity to fanaticize about being the white knight coming to save the vulnerable female. We, in the audience, have plenty of opportunity, too, to see lots of gruesome tabloid photos with all of the attendant voyeuristic stimulation that comes with that. The film walks this fine line between exploitation and psychological self-exanimation and, by and large, wins the battle. By the end of the film we learn a thing or two about Aiden and perhaps a thing or two about ourselves.

If nothing else, we learn that our own self-judgment may be the best thing that ever happened to us. Grizzled cop Pete (played to the hilt by Ron Perlman) knows this very well. His job is dealing with the real side of these murders. He does not have the privilege of relegating the murders to the fantasy world created by Aiden. He is stuck with investigating them and finding out the truth behind the crimes, which seldom, if ever, lends itself to the white knight factor. Some victims have to work to get into the morgue. For others, it just comes naturally.

Lawson does his best to carry the weight of the world on his shoulders, but it is the character of Pete the cop who does the heavy lifting. Perlman, of “Hellboy” fame, could be the film noir hero of the decade if he would come out from behind the make-up (including the beard and cigarette in this film) and let the audience see inside him. There is not near enough of him in this movie, and too much of the same thing from Aiden’s character.

Pete knows what is going on in Aiden’s mind. He has been through the entire trip. He has seen the beginning, the middle and end of hope for fixing what is wrong with people. Through Pete, we know that Aiden is heading for a dead-end road. Pete urges Aiden towards the implicit action, perhaps looking to retrieve some of his own self-respect long since lost through his incapacity to save those worth saving and end the miserable existences of those who fall short. Perhaps Pete is the devil, maybe even responsible for some of the deaths. All this is possible, but we never know for sure.

Returning to the white knight department, the fair maiden is Virginia (Emma Lung), who has a problem with a boyfriend. The boyfriend, Ravi, is a self-absorbed jerk who is out of work, lives in an abandoned factory and probably has a drug issue. Plus he yells at Virginia, which is a sin that Aiden cannot abide. The good thing about the screenplay is that when we first witness this verbal abuse we feel the same way. As the film progresses, Ravi’s abusiveness becomes more gray and Aiden’s becomes more pronounced. Good writing, but still too thin for a great film. There is just not enough drama to fill in the 113 minutes.

Great choice of location in choosing to shoot the film partly in Detroit, a city whose time has come as a setting for the next wave of great American film noir. Lonely abandoned factories filled to overflowing with the spirit of tedium and shattered dreams, litter strewn industrial alleys that once saw a thousand feet a day and now have not seen so much as a skinny rat in weeks and creaking rusting railroad tracks, bridges and box cars. A city that is more than capable of expressing the misshapen lives of characters like Aiden and Pete. A city that is yesterday’s milepost on America’s road to greatness. Chicago is the other location. Although its rail yards are mostly gone, there are still some noir settings to be had.

The film includes a great, but all too small, part for Edward Furlong (Ed Norton’s kid brother Danny Vinyard in “American History X”) as Ravi, the jerk boyfriend who turns out to have more humanity than Aiden.

Look for more to come from this cast and crew and, hopefully, more psycho-horror noir from screenwriter Robert Lawton (co-written with director de Lauzirika). 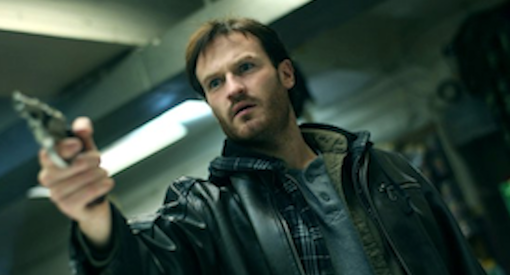