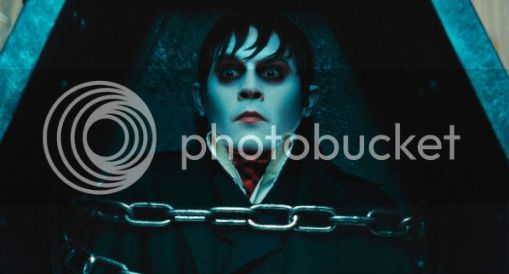 When Dan Curtis created the show “Dark Shadows” in 1966 he hardly knew where it would end up going. Not only has this show become a cult classic, but its main character, Barnabas Collins, is one of the first incarnations of a solemn vampire, full of sympathy and regrets. that many modern day vampire characters could be based on.

Now, Tim Burton has gotten hold of “Dark Shadows” and made a modern day retelling with a ’70s flair. And once again, Johnny Depp is playing the lead in a Burton film – this is their eighth collaboration. So with an all-star cast and a mixture of science fiction, drama and comedy, can “Dark Shadows” please fans of the original series while still accommodating those who were unfamiliar with the characters and story? Read on and find out.

Our story takes place in the 1700s when the Collins family leaves Liverpool and moves to North America to expand their fishing business. Things really take off and soon there is a new town erected around the port and it is even named Collinsport, after the family. The son of Mr. and Mrs. Collins, Barnabas (Johnny Depp), grows up to be a rich, spoiled playboy and when he scorns the affections of the wrong woman — a housemaid named Angelique (Eva Green) — he soon learns he shouldn’t have. She ends up being a witch who not only casts a spell on Barnabas’ one true love, Josette (Bella Heathcote), but also one on him as she turns him into a vampire. With the town against him, Barnabas is imprisoned in a steel coffin and buried … until nearly 200 years pass and he is set free by some construction workers who haphazardly uncover the coffin.

Returning home to find the family business and the mansion he once lived in lying near ruins, he masquerades as an old family relative in hopes of rebuilding his family’s business and fortunes to the way they once were. His surviving lineage consists of Elizabeth Collins (Michelle Pfeiffer) and her teenage daughter Carolyn (Chloë Grace Moretz), Elizabeth’s useless brother Roger Collins (Johnny Lee Miller) and his shy 10-year-old son David (Gulliver McGrath). Also presiding in the home is David’s live-in therapist Dr. Julia Hoffman (Helena Bonham Carter), groundskeeper Willie (Jackie Earle Haley) and the newly-hired governess Victoria Winters (Bella Heathcote). With only the best intentions in mind, Barnabas is back and out to fix the families business and fortunes, but when the eternal witch Angelique hears of his resurrection, she comes back to fix the family’s fate, once and for all.

This film and its characters are a bit shallow in the depth in which we get to know them. They are soft stereotypes and this is not the fault of the actors, but of the script. The film is a visual feast as always, with Burton’s eye for the dramatic flair, but even that can’t keep it from failing to reach the audience on deeper level. It is this flaw that will keep most from truly enjoying this movie. The movie’s touching and entrancing beginning scenes give way to the lighter and the more comical, which has an anticlimactic effect on the viewer.

We see Barnabas and know that he is genuine, but we are not shown his true heart enough to really root for the trials he must face. Pfeiffer is a strong leader of the family and Moretz plays her teenage daughter well; they have a fun chemistry and their relationship could have been delved into further. I also enjoyed Helena Bonham Carter as the always drunk psychologist to the family, she is amazing and I never get tired of watching her in any movie. Eva Green played the witch with charisma, but came across as bitchy more than menacing. Overall, the entire cast did well with what they were given, but that wasn’t much.

The main problem in the film is mostly seeing Barnabas in many fish-out-of-water moments and mistaking modern items for evil or supernatural things. This bit is funny, but only works for so long. I also wish that we were given more background on the family and their situation. Instead, we are thrown into the ’70s and the Collins family business, fortunes and lives have changed dramatically; they lightly address these in the end but not enough.

Another thing that bothered me was that the film seemed to have a similar feel to the tone of “Alice in Wonderland” or Burton’s recent “Charlie and the Chocolate Factory,” both appealed to families, but “Dark Shadows” goes very dark and overtly sexual at times, which to me could be a major conflict for parents — something that could affect its overall box office performance.

Now onto the good. I did love Depp and the facial movements and mannerisms that he came up with for Barnabas. The look and scenes created on screen were dark and creepy — very Tim Burton — and therefore I enjoyed the look of the whole film. The setting of the ’70s and the music used in the film is fun, retro and really helps set the mood. There are quite a few laughs in the movie as well, just not enough to save it.

My verdict: If you are a fan of the original series, you might enjoy seeing these characters brought back to life, but don’t expect to learn anything new about them. If you are a lover of Tim Burton or Johnny Depp’s work, you will probably end up seeing this movie no matter what, just don’t expect a complex masterpiece like we have seen from the director in the past. For all others seeing “Dark Shadows,” it is your call whether to see it or not, just know you won’t get much more than light entertainment.

“Dark Shadows” resurrects itself onto your local big screen today and is rated PG-13 for comic horror violence, sexual content, some drug use, language and smoking.