The next time you see this movie may not be your first time, but it may be the best time. Leaping from the screen in a spanking new 4K restoration of a classic noir, “Detour” defines the genre. 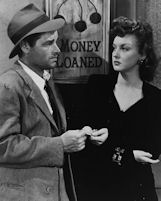 Down on his luck piano player Al Roberts (Tom Neal) is beaten down by a world that will not give him the time of day. Seizing his last chance at the brass ring, he hitches to California to join his equally penniless soul mate in the search for a better tomorrow. Only, he does not meet his love in the promised land, he meets Vera (Ann Savage), the dame who gives him a free ride to a lifetime of misery.

Edgar G. Ulmer’s 1945 pulp classic has been incredibly restored by the Academy Film Archive and The Film Foundation in collaboration with Cinémathèque Royale de Belgique, The Museum of Modern Art, and the Cinémathèque Française. Missing scenes have been restored and integrated from old safety and back-up prints and the sound is cleaned up and crystal clear. The message comes through like slugs from a .38. Some guys get all the breaks, and others get nothing, courtesy of a sexy blond who would pour water on a drowning man.

Not that Al does not have it coming. After all, he stole that hapless mug’s car after the sap croaked in the passenger seat outside Reno. The right thing to do would have been to report the death to the police, but that would have risked a murder rap. After all, the law does no favors to an out-of-work hitchhiker caught with a dead body in the middle of nowhere. Better to just hide the body, steal the man’s ID and start a new life.

Ah, precious guilt, poison for the soul of the working man and moolah in the bank for the pulp film maker. After all, we are all human and we have all cheated a little now and then. No harm done, especially when the loser is already dead. The only problem is that sins come back to haunt us, in one way or the other. For Al, the angel of death is Vera, the embodiment of his conscience, come to life in the passenger seat on that road to eternity.

Neal is the straight man in this flick and Ann Savage is, indeed, the angel of death. From the unforgiving highway, dark as night and cold as concrete, to the glaring, flashing neon signs of Reno, life on the lam has only one destination. That is a place of neither life nor death, a life where to love is to lose and to help is to hurt.

There is no sunshine in this movie. Shot in about a week, and seemingly entirely at night, in the dark, it is too dismal to be a cautionary tale. It is more the kind of movie that makes one glad to be able to get up in the morning a go to work. And do not try to run away to California, either.