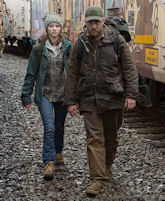 Hidden deep in Portland’s Forest Park, one of the largest city parks (5,100 acres) in the world, a man and his daughter live in a tent abutting a hill, cook under a tarp, and hide camouflaged in the damp, richly green forest. It is inescapably idyllic. They play chess, read, tend a garden and remain invisible from the human eye. Their sacred view is of bushy filigreed ferns and tall trees with filtered light streaming through.

That’s what the film shows, but the book, “My Abandonment” by Peter Rock, tells of the two surviving through all four seasons for four years in this seemingly hobbit-like nature preserve. Based on a true-life account he read in “The Oregonian,” Rock created a non-judgmental story of survival and family. Filmmaker Debra Granik brought it into pure sensory perfection on the screen.

Granik captures Rock’s vision of human and nature living in harmony. Because her filming was only during the spring, we never get a taste for the real hardships this situation must have provoked. Portland area winters have ice, snow and numbing night temperatures. An average of 40 inches of rainfall keeps the forest damp most days of the year. Mold, mud and mosquitoes must have been a problem.

The dad, named Will, is a veteran suffering from PTSD. He gets a monthly $400 disability check and the two hike a few miles out of the forest to a local Safeway for supplies each week.

Teamed with Anne Rosellini, Granik offers no commentary, judgment or bias. The filmmaker/writers simply let us see what the life this father, and daughter, named Tom, was like during one stretch of months.

Deservedly up for awards in acting and directing, “Leave No Trace” is another in a series of films by Granik and Rosellini that deals with personal strength and willpower. One of the few films to ever receive a 100% favorable rating from critics, it is a fascinating story that leaves the viewer hungry for more – a sequel, please! 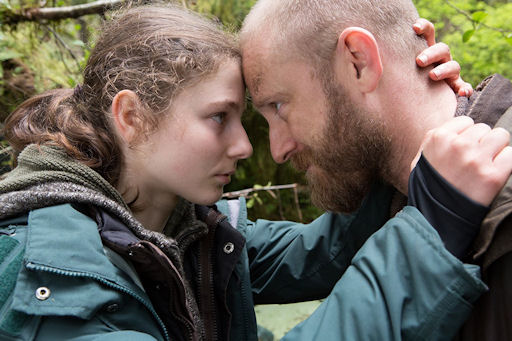