Review: Do Not Resist

Remember the 2014 Ferguson, Missouri, protest for the police shooting of Michael Brown? Craig Atkinson, filmmaker and the son of a SWAT team officer and a participant in SWAT trainings, reveals that times are a-changing when it comes to police tactics and ideology throughout America. Snowden’s revelations are just the pre-curser to invasive, militarized police departments. The viewer becomes more confused about whom to side with than ever before, and that means this documentary is a thinker. 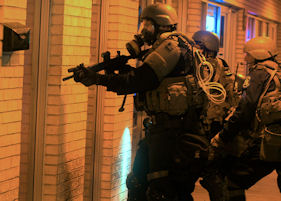 I resent it when films present just one side of the story or use emotion to manipulate my perception. Atkinson, director/producer/cinematographer and editor, collaborated with a production crew noted for prior documentary work in exploring issues in social justice. While he has tried to give just the facts, you know where he is heading.

Since it is against the law to use the army against its own citizens, the police departments are being given military surplus supplies to become militarized. The film states that “the Department of Homeland Security has given police departments $34 billion … The Department of Defense has contributed an additional $5 billion in free military equipment to law enforcement. Armored vehicles are available for free under the program,” though each one costs the American taxpayer up to $1.2 million to manufacture.

Even a community in Alaska with no murders in 2014 and a New Hampshire town with only two murders since 2004 are gifted with expensive tanks and supplies, though like every place else, given no training.

I understand that people of color are especially vulnerable to an escalated police force. For example, Atkinson filmed a police raid in a neighborhood of small little houses. One officer takes some kind of long hook and upon arriving at the house smashes in some of the house windows with it while other officers entered the house to unresisting inhabitants.

The officers are rude, abrasive, physically harsh, insulting and handcuff one of the men in the dirt. He was just leaving for his lawn-mowing job that he has to finance his college education in computer science. They found $800 he was using that day to buy a weed-eater and he had the bill and info to prove it. But they took him away on drug ring suspicion. He was soon released. A family member wants to know who is responsible to pay for the broken window. He is assured by the officer in charge that the police are not.

Roger Waters, famous for “Another Brick in the Wall,” included in his concert the words: “We are Ferguson.” His mammoth floating pig, reminiscent of the elite in “Animal Farm,” floated above the crowd reminding us of our oppression and divided we cannot win the battle.

Why do police kill rather than wound or taze – even if Ferguson’s victim, Mike Brown, accosted the policeman first in the police car? We know that when even pulled over for speeding we treat the police with respect and immediate compliance. We know that police will probably shoot to kill, not wound or taze, if we try to resist or run.

Like the question asked in Oliver Stone’s “Snowden,” how far do we allow the government go to procure our safety? When are police no longer our protectors just making sure our roads, homes and families are safe, but a ruthless, invasive, mechanized, militarized force? Have people of color been so disrespected and abused through time that they feel acceding to a police request is more dangerous than resisting?

Playing through Oct. 21, 2016, as part of the Voices in Action series at the Northwest Film Center at Whitsell Auditorium, “Do Not Resist” also has a robust theater schedule, having won the 2016 Tribeca Film Festival Award for Best Documentary. Watch out for an Oscar nomination.