A woman walks on hesitant feet to a secret appointment at a humble shed in a dark forest. She is lightly dressed, the clothes she wears functional more than cosmetic. She is pretty, and her lover waits for her with great anticipation. When she arrives, several pounds of high explosives are part of the lovers’ bed. She has taken the explosives from her thuggish husband, a man mostly void of intelligence and completely void of emotion. It will be the last thing she asks of him.

The Film Society of Lincoln Center and Subway Cinema kick off opening night of the New York Asian Film Festival with this darkly humorous semi-biographical tale. Running June 29 – July 15, 2018, this is the 17th year of the NYAFF in New York City.

Cut to the bloody remains of the shattered shack, the remnants of which form the grisly story of the shattered wife’s marriage and her, now destroyed, tiny family. She is the mother of Akira Suei, a talented young artist who has a remarkable future ahead of him. As the hands, arms and other body parts are located and tossed into bags by disinterested workers, Suei is forming his own ideas of romantic love, carnal love, and the way society distinguishes the two.

Perhaps the Suei is irreversibly damaged by his mom’s explosive demise, or maybe he has seen truths denied to most, but he is genuinely oblivious to the distress his radically disrobed pictures unleash on Japan. This is, after all, the time of Japan’s emergence as a true world power. Success in manufacturing is hers and the country’s powerful conservative hierarchy is not about to see her future wrapped in an Asian Hustler.

The significance of this is lost on the young artist as he makes very private sex business come alive with very public art. “I love it, take it away, the police will close me down,” says his first customer about his phallic symbol signage. So it goes, sometimes the truth is too much to bear. Akira should know. Temporary setbacks do nothing to dampen his enthusiasm as he ferrets out the best photographers, writers and editors, bails them out of poverty and brings their talents onto the national stage.

Balancing explosive interpersonal relations with the dynamite demise of his philandering mother, this powerful yet ephemeral paean to the creative celebrates the wacky and mourns the impossible. The photography is straight up, street smart and ready for the next punch. The sound track is right there, matching the fast-moving characters and plot with next beat. Phone sex and publishing deadlines are juxtaposed with hilarious police interviews. Explosive images inspire guerrilla warfare but as it turns out, humility is the answer. Love them, it drives then crazy. 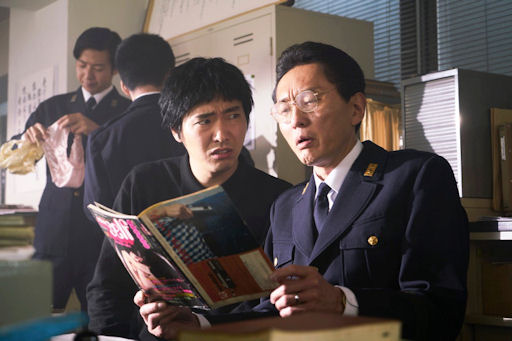