If you think war is hell, see what happens when it stops. 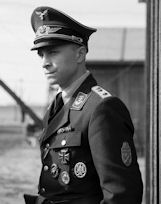 Like Tammany Hall’s Boss Tweed, Nazi deserter Willi Herold saw his opportunities and took them. Based on a true story, writer/director Robert Schwentke turns his back on the “Saving Private Ryan” fireworks and focuses on the filthy drudgery of war. In the closing days, German forces are starving, exhausted and retreating in disarray and panic, some being slaughtered by incoming Allied troops. Many are choosing to desert and take a chance on being caught and summarily shot by the SS instead of starving to death on the front lines or being summarily shot by the enemy. As the film opens, Herold is caught and is being used for target practice by a sadistic SS sergeant.

Stumbling through the brush in panic and nearly dead from hunger, Herold runs into an abandoned officer’s car stuck by the side of the road. Inside is a Nazi captain’s uniform, complete with the highest commendations. Hard to believe at first, perhaps the captain was taking his opportunity as well, hoping to melt into the farming community and avoid death at the hands of the allies.

Herold is nobody’s officer. His demeaner is more like Pee-wee Herman than Hermann Goring. He is justifiably terrified when he runs into a group of battle hardened soldiers turned criminal deserters. Military fugitives who face death by the minute, they will kill anything or anybody for a meal or a cigarette. Despite a ruse than appears certain to result in Herold’s bloody death, the soldiers’ leader sees opportunity beyond the dummkopf scam. The group officially “attaches” itself to the phony Captain as Herold shows the first signs of casting off rationality.

This beautiful moment is Max Hubacher’s peak in his portrayal of a soldier driven insane by war. His eyeballs widen and roll like the windows of a slot machine as he sees a way through the holocaust, or at least a way to the next meal. The abandoned mantle of the arrogant Nazi supremacist is re-occupied by a new soul, the previous inhabitant removed to parts unknown. Orders direct from Hitler are imagined, ratified and promulgated as the plucky band cruises into their trial by fire. They meet a band of military police with a single mission, to slaughter or enslave anybody caught behind the lines. The stakes are raised to lethal levels as the ridiculously underpowered Herold must make good on his new identity.

From that point on the story shifts to those around the phony captain, who are slowly drawn into the ruse, each for his own reasons. The ceaseless threat of death at the hands of the Nazi machine pervades many motivations. He looks like a complete fraud, but what of he is not? The price of cooperation is humiliation, but the price of mistaken non-compliance is death. The situation snowballs as Germany death spirals into the final days of the war and confronts the dawn of a new, painful world.

Milan Peschel threatens to steal the show as Freytag, the obviously insane counterpart and first ally of the counterfeit captain. Lean and mean cinematography by Florian Ballhaus (“The Devil Wears Prada,” “I Feel Pretty”) and a super supporting cast of black comedy experts launch this tragedy solidly into the realm of powerful social commentary.