A middle-aged mom finds herself, sets herself free, and in the process sets her family free as well. In a wonderful twist of plot, the screenplay is set in the context of a world class jigsaw puzzle competition, when the central message has nothing to do with that. There is an underlying respect for the individual, a person’s right to choose and the differences in us all. If there is any puzzle related message, it is that the solution to the puzzle of happiness may be right before our eyes. 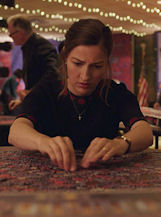 The screen time, well deserved, goes to Kelly Macdonald, playing Agnes the suburban mom. Agnes meets Robert (Irrfan Khan) through a notice in a puzzle store. From the get-go the viewer assumes this is going to be the classic rags-to-riches yarn of the mousy, bullied housewife showing the world how great she is. There is some of that, but precious little, thank goodness. The puzzle starts out as the star of the show buts ends only in the supporting cast. The real stars are the villain, the fear of self-actualization, versus the hero, the courage of self-acceptance.

The remarkably well-paced story shows, step by step, Agnes and Robert having several things in common. Both have the kind of specific genius that can bring a crack-like 15 minutes of fame and then leave behind bitter and hollowed out has-beens. The film first sucks the viewer into the myth of the easy solution, the notion that a fairy god mother will wave a wand, uncover the key to happiness, and the person will live happily ever after. Next, after Robert and Agnes seem to have found the key, they open a pandora’s box of unknown devils. Finding, to their horror, they cannot go back, they are forced to admit to the real problem. They have found the enemy and it is them.

Macdonald builds on the inner strengths of her past characters to come on strong in the home stretch. She combines the traditional country woman in “No Country For Old Men” with the devout Catholic immigrant of hidden talents in “Boardwalk Empire” and comes up with a born-again woman.

As good as Macdonald is, it is Natalia Smirnoff’s screenplay that carries the day. Her 2009 film “The Puzzle,” won the Argentinean Film Critics Association Award for Best First Film and was nominated for Berlin’s Golden Bear. Oren Moverman, Oscar nominated for his original screenplay for “The Messenger” teams up with Polly Mann to bring home the bacon.

Oscar nominated Marc Turtletaub brings his experience as producer for “Little Miss Sunshine” to bear in his second directorial work. The feel of the movie is soft, but firm, with a little humor thrown in at the right times. The beautifully produced piano and string score by Dustin O’Halloran brings depth and softness to the gentle persuasion of the story. “Ave Maria,” sung on the New York City subway by countertenor Matthew Shifrin manages to be powerfully scary, reassuring and funny at the same time.

A mild-mannered effort allowing new director Turtletaub to step softly, this is a must see for the legion of Macdonald fans. 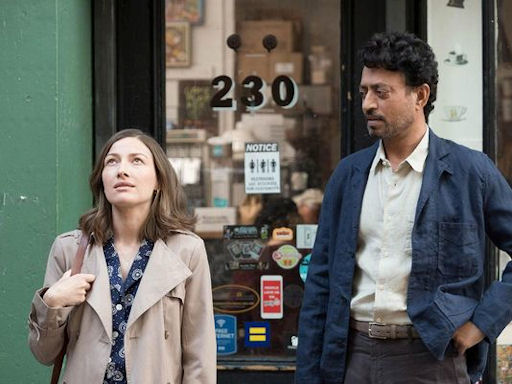