A handsomely thin German businessman comes to the forested Telemark region of Norway anxious about his mission and in the first stages of grief. Surreal images of his deceased Chinese wife come to him when he is alone. She is dressed in colorful flowing Mandarin robes and exotic headdresses. She does not speak, but her face is colored to represent a sea of sadness, passion, longing, and distance. When she appears in the Norwegian landscapes, close to him, our man is comforted and smiles. 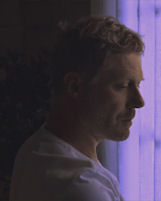 This is independent movie-making at its zenith. Rob Tregenza, director/cinematographer, films it the way he wants it — slow and easy. The environment creates the mood and surrounds the widow with its possibility.

The widower’s burly Norwegian Elk Safari guide and driver stops by his clearly upset girlfriend’s as they travel. She lets him know she is “late” and won’t talk to him. He is flummoxed and leaves in haste with his German cargo who promises to pay him well for the journey.

The made-up term “gavagai” relates to trying to make sense of a word in a foreign language and its ability to take on different meanings. In literal context, it relates to the widower’s intention to come to Norway to finish translating the Norwegian poems his Chinese wife was translating into Chinese. He may imagine it’s a way to extend their life together, but he is not fluent in either language.

While the guide’s anxiety about his girlfriend grows, the secretive nature of his passenger’s demeanor disconcerts him. It’s when they finally stop at their final destination that we learn what the grieving German has been carrying in his bulging briefcase.

Rob Tregenza, a phenomenal American director/cinematographer, handles the camera himself, imposing little background sound. In the quiet, observing the widower’s pain, ironically the guide is shown the way. It is also this final abyss of loss that allows the widower, played by Andreas Lust, to rise again. Lust’s performance is magnificent – never has a man so completely given in on screen.

Tarjei Vesaas’s poetry, about journeys, pain, sorrow and submission, runs through the film like a slow stream on its way to the sea.

“The Road ends in the night
But the night ends on the road
The road slashes like a knife through life
separating good and evil
The road is the road to the last day.”

After an initial release in 2016, “Gavagai” has a limited opening this month in New York, Los Angeles, Santa Fe and Spokane.