Review: Embrace of the Serpent

“Embrace of the Serpent,” writer/director Ciro Guerra’s seething portrait of the abasement of a people and an environment, is not to be missed. Based on the written diaries of explorers Theodor Koch-Grunberg and Richard Evans Schultes, the film combines amazing first hand descriptions by the explorers with a surreal story of unbounded greed.

The story (co-written by Jacques Toulemonde Vidal) tells of the relationship between Amazonian shaman Karamakate and the two scientists who work together over the course of 40 years to uncover healing plants in the rain forest. The movie begins with the final days of Grunberg in the early 1920s. He has spent too much of his life in Amazonia and is dying of an undisclosed illness. In fact, he probably died of several illnesses, such was the lethal nature of the fecund rain forest.

He meets the young Karamakate, who revives him with a seemingly magical potion and takes him on a journey of discovery. The journey purports to be in search of a curative plant, but is actually a journey to cure the European of the curse of his greed.

The movie then switches back and forth between this story and that of American Schultes who is on a similarly mysterious mission. He, too, is there in search of riches that may include new flora with industrial and pharmaceutical promise. Karamakate, now an old man, takes him on a similar journey, finally showing him the impossibility of his search. Time has passed, but it has not changed either the shaman or the endless stream of “scientists.”

Interwoven into their search is the accidental discovery of the hideous establishments of the rubber barons. The first encounter with the rubber plantation confronts the explorer with an armless man, apparently punished for his lack of cooperation with the plundering westerners. The second is a bizarre visit to a remote Capuchin monastery that survives by stealing children from tribes to raise as Catholics. Echoes of similar experiences in North America are testimony to the truth of these horrific occurrences.

The cinematography of the film is luscious black and white with the sparse but superbly defined soundtrack accenting the natural beauty of the Amazon river basin. Most of the soundtrack is the sounds of the river, flowing water and the dulcet plopping of paddles in water as the men make their way. The timeless flow of the river is accented with the jerky, frenzied and downright sick attempts by the colonial outsiders to exploit the magic of the region for money.

Realistic jungle shots are combined with surreal sequences of the Jaguar and various snakes, taking the viewer into the heart of the lethal but poetic environment.

Nods to Werner Herzog’s legendary “Aguirre, the Wrath of God” and “Fitzcarraldo” reverberate in the background. It is testimony to the beauty of the direction and screenwriting of the film makers that this movie does not need a Klaus Kinsky to bring the insanity to the fore. 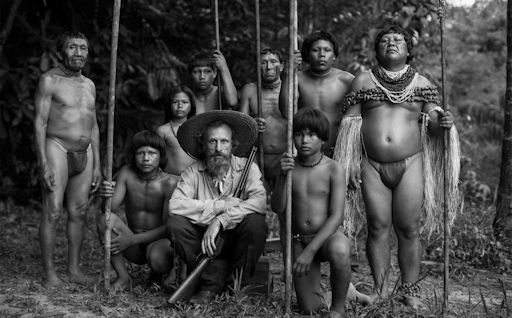