Asghar Farhadi’s “Fireworks Wednesday” features several kinds of fireworks converging on the naïve young bride Rouhi. Taraneh Alidoosti reunites with Farhadi after her successful work in “About Elly” to play the very young, and very much in love, Rouhi. The film is set on Fireworks Wednesday, the day of celebration for the Persian New Year. A day of thrilling fireworks, happy dancing and wild bonfires in the streets. But those fireworks mean different things to different people. 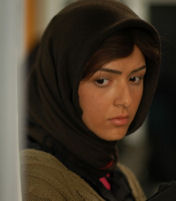 The film begins with Rouhi and her lover and fiancé riding his motorbike in Iran. As they are cruising and laughing, a life full of dreams ahead, there is a sudden crash of the cycle. A death omen? Not exactly. It is only Rouhi’ s mischievous chador that has become slightly entangled in the sprocket. No harm done. “Hold on to your chador,” scolds her soon-to-be-husband. Little does either of them know what that chador will see in the next twenty-four hours.

The next morning, Fireworks Wednesday, Rouhi sets out for her first assignment as a cleaning maid. The boisterous explosions on the street, combined with leers of the young men, portend evil. There will be trials of the heart and soul coming, we are sure of that. There is too much fire and noise blotting out the peace of Rouhi’s soul. Sure enough, the security buzzers do not work and she is stuck on the sidewalk. She barely makes it to the disheveled apartment after a series of clumsy and odd meetings.

In the flat, which appears to be prepared for either painting or demolition, Rouhi is confronted with Mojdeh (Hedieh Tehrani) and a series of fights between her and her husband, Simin (Pantea Bahram). Although the fireworks are just beginning outside, they are full blown in the tiny rooms. The beautiful Mojdeh (all of the women in this film are beautiful) is sure her guilty-looking hubby is having an affair. He leaves at all hours of the day and night to go to work. Things are broken, the apartment looks like a test firing range.

As Rouhi stands by, they have another bout as the glass repair man arrives to fix the window Simin broke the night before.

Scenes like these that, while a bit contrived, make up the wonderful charm of this movie. Make no mistake, the subject matter is as serious as a heart attack. Cheating on a spouse can be a death sentence in any country observing any religion. As things heat up, the explosions in the street get louder and more violent. The bonfires grow to consuming entire cars. Indeed, we can almost see persons being burned at the stake. Or is that just our imagination?

To the guilty conscience everything simple and joyous looks ominous and threatening. When one’s life is lived in fear, everything becomes fearsome. The fires not only consume the guilty, they threaten to consume the innocent as well. Will love survive? See this great essay on love and truth and find out for yourself. 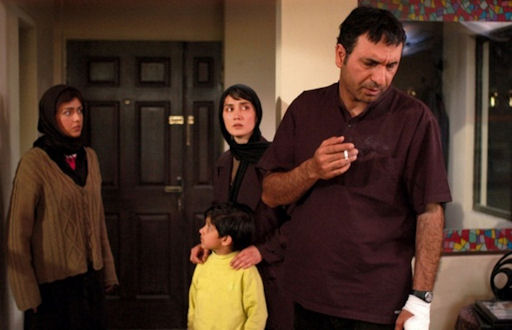