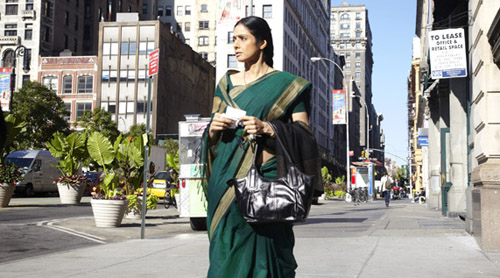 Richly leveled with wit, warmth and wisdom, “English Vinglish” is a film for every person, regardless of age, nationality or politics. Set first in India, an exquisitely beautiful woman, played by India’s most popular actress, Sridevi, finds that not being proficient in English brings her disrespect primarily from her own family. Her lack of expertise generates disdain from her daughter and is possibly the reason her husband seems to be losing interest. When an invitation from her sister comes from the States to help out with her daughter’s wedding, her husband wants to send her ahead of the family. Does he want to get rid of her?

At the prodding of her husband she worriedly obeys and arrives in Manhattan. Not long after arriving, she is humiliated by a surly fast food clerk. Then she sees a bus advertising a class guaranteed to teach English in four weeks. The game is on.

A flamboyant teacher, a handsome, sensitive French student and plenty of humor create an English class with lovable characters. Who falls in love, who arrives from India early and who ends up at the wedding?

Past the humor, it’s truly surprising that in the last 20 years English proficiency has become the international IQ standard. A line has been drawn in the sand. For those young people who cannot demonstrate fluent English, whether in India, Africa or even most of Asia, the doors to a safe, stable life are locked like the steel doors of a prison. There is little hope for prosperity without an ability to speak fluent English – and pretty much only the expensive private schools in the Indo-African world offer the chance to acquire that degree of proficiency. Class status is protected and perpetuated, and the poor are marginalized into an endless sea of slums and suffering.

“English Vinglish,” written and directed by Gauri Shinde, has a lot to say about judgmental attitudes, relationship equality, and respect. However, she does it with lovable humor and tons of fun.

Both Shinde and Sridevi have been nominated at many festivals for awards and have so far come away with nine. While arrogance and judgmental attitudes persist in the world regarding how well we express ourselves in English, the current universal language, the point of this film is to practically deal with the situation and show a way to triumph. You will enjoy this film and only wish it wasn’t over so soon.