The good thing about Ridley Scott’s latest special effects lollapalooza is going into it you know exactly what to expect. The story, rough as it is, is taken from the Bible so there are no spoilers to be had. From the opening battle scenes, where Ramses (Joel Edgerton) has the most stunning gold plated armor, tailored to a T, and Moses (Christian Bale) is dressed like, well, a soldier, you know Edgerton is going to get the limelight in this one. Even so, when you see seeing Ramses broken out in boils, like a kid with a bad case of herpes, you know Scott had guts to make this one.

The screenplay credits for “Exodus: Gods and Kings” go to no less than four writers. This is a lot of people, considering they were given the story, and even more amazing considering there is so little to the screenplay. It should be OK for the PG-13 audience, as there are lots of pictures and not too many words — even if the cinematography is gloomy and the soundtrack is elevator music.

Thank goodness special effects dominate, and boy are they good. Hands down the best tidal wave, ever, when Ramses’ army tries to chase after the escaping Hebrews. Boy, do they get theirs. And they had it coming, too, being so mean to the Hebrew slaves. The funny thing is, Ramses is not killed in the crushing mountain of water. He lives to exchange final insipid lines with Moses, who is more-or-less dumbfounded by the entire affair. Speaking with a small child who is relaying the word of God, Moses can hardly believe what he is hearing.

Nor can he believe what he is seeing with the dead livestock, blood, maggots, flies, frogs, lice, boils, locusts, hail and fire, darkness and, finally, the snuffing of the first born. During this period the Egyptian stock market dropped precipitously. 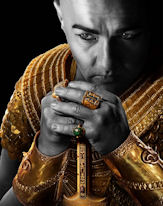 Screened in real, live 3-D, which is almost entirely wasted, the locusts actually come out into the audience, which is cool enough. But when the Red Sea parts and the sea gulls start flapping around over the front rows, the film, once again, flops into the absurd. There are more gulls in the picture than Egyptian legionnaires. But we know the sea is going to come back like gang-busters and we are on the edge of our seats waiting to see it in 3-D. It is great, but does not seem that much greater than it would have been in 2-D.

Apart from the opening scenes where 3-D aerial footage is used in the most trivial fashion and a few seeming gratuitous sequences afterwards, there is no need for the 3-D. It is as if somebody started out to make a 3-D film and changed their mind about half way through.

All this is well and good, but it returns to the question of why there were four writers plus an accomplished director in charge of making a film that hardly has a single meaningful line of dialog. Even stranger that the lack of a screenplay is coupled with a pharaoh’s ransom in A-list actors. Aaron Paul, Sigourney Weaver, Ben Kingsley, John Turturro and Ben Mendelsohn share the support work and mutter lines that come out like bubbled captions in a comic book. Why do they make films like this? For the credit of having worked with the genius who made “Alien?” And Weaver already had it.

One thing for sure, Aaron Paul will never go back to work selling meth like in “Breaking Bad.” His street creds are gone.

Oscar nods go to Tara Fitzgerald (as Miriam, Moses servant sister) for most courageous hair. Also to Ben Mendelsohn (Hegep) as best sniveling turncoat since John Cazale played Fredo in “The Godfather.” Tough break for Bale as he plays a virtual cipher whose only persona is the clueless one and whose beard prevents us from seeing if his facial expressions are changing at all.

The hope for Edgerton is that he will make enough money from this movie to go back to making the creepy super-edgy Aussie crime dramas that made him famous.