As a horror fan girl, I have some rules when it comes to horror films. By rules, what I mean, is there are certain things that legitimately frighten me and I have a hard time dealing with. There aren’t many, but there are three. 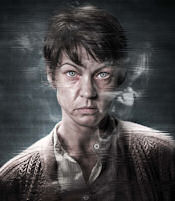 Creepy children in scary movies are not my favorite thing, I can deal with this in film, but it’s one of those heebie jeebie things for me. Then there are events that are based on true stories. Again, very tolerable and, in fact, enhancing to the fear factor, even though I know “based on a true story” doesn’t truly mean the events depicted are accurate. The third thing deals with horror films dealing with possession. I don’t have a good reason for why these disturb me so, as I am not a religious person by any stretch of the word.

The real scares exist for me when more than one of these elements co-exist within a single film. “The Atticus Institute” is boasting two of these in it’s marketing push. Hook, line, sinker, I’m in.

Possessions based on true stories, that’s what gets my heart really racing. “The Atticus Institute” has a very catchy slogan that I have seen around the net, which is “The only case of demonic possession recognized by the US government.” That’s pretty good bait for a scary movie.

The premise is fairly simple and basic. The film takes place in 1976 at an institute founded by Dr. Henry West (aptly named the Atticus Institute). This particular institute specializes in the research and testing of ESP, clairvoyance, psychokinesis and similar displays of the supernatural amongst individuals. There is one patient, Judith Winstead, who displays things that Dr. West and his colleagues have never seen. She is on a whole other level, so much so that the US Departmen of Defense interjects with the goal being to harness her Judith’s powers for the intent to weaponize her forces. Her powers of course are that of evil and cannot be contained or harnessed.

The trailer for “The Atticus Institute” looks dated, as the premise of the scare tactic is that this is footage the government has had concealed and tucked away for nearly 40 years. My issue with this type of secret footage is that while it is scary, absolutely, it is to “The Blair Witch Project” what ghost stories are to “The Sixth Sense.” It is a killer gimmick, the first time around. That’s not to say it’s not effective, but maybe just not as effective.

There are definitive jump moments in the trailer which is what I would expect from a film of this type. The demonic display is as expected, from jumpy camera angles and with visual subtlety. I can’t say that it looks particularly scary but, of course, that’s out of context from the plot and otherwise scary moments not shown in said trailer.

“The Atticus Institute” is coming to us straight to DVD and Blu-ray from Anchor Bay Enterainment. The film is brought to us by producers with a strong background in horror, including Peter Safran, who produced “The Conjuring” and “Annabelle.”

The film is directed and written by Chris Sparling — who wrote “Buried” and “The Atticus Institute” — and it marks his directorial debut. Starring William Mapother (“The Grudge” and “Lost”), Rya Khilstedt (“Dexter”), Harry Groener (“Buffy the Vampire Slayer”), Sharon Maughn (“The Bank Job”) and John Rubenstein (“Angel”) this is a film with a cast and crew that is no stranger to horror and the likeness.

I hold true to my opinion of horror flicks, I go in with no expectations because with horror and myself, one of two things is going to happen. Either I will get a legitimate adrenaline rush and perhaps check behind every door and, of course, the shower curtain in the days following my viewing, or if the flick is not so good, me and my friends have no problem poking fun and laughing at the would be scary moments. Either way, some form of entertainment will ensue, from the film itself, or my own self amusement because of the film. That’s my theory with horror and I’m sticking to it.

Will I be watch “The Atticus Institute?” Of course I will. Straight to DVD and Blu-Ray, easy enough. After all, I’m curious to see what exactly the government has been hiding in the realm of demonic possession for all these years.