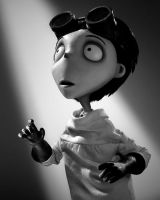 Twenty-eight years ago, a young man named Tim Burton got his start when the right people saw a live-action short he made called “Frankenweenie.” The short film took the basic story of 1931 film “Frankenstein” — based on Mary Shelley’s book of the same name — and paid homage to the classic story while also parodying it.

Now, he is returning to the material that gave him his start — only this time he’s doing it in 3D black and white stop-motion animation. Having such a passion for this project for this long is apparent in the care and detail Burton puts into it and he has cast many of his favorite actors and actresses to voice every character. Deftly combining all of the oddness and inventiveness associated with his films, “Frankenweenie” is an instant Tim Burton classic.

Being quiet and a bit odd hasn’t won Victor any friends at school; in fact, he spends his days making short monster movies with miniature models. When Victor’s doting dad gives him an ultimatum to join the baseball team or no school science fair, he reluctantly agrees. But when tragedy strikes and poor Sparky is struck and killed by a car, Victor is crushed and retreats into his room, sad and alone. However, a school experiment from his teacher, Mr. Rzykruski (Martin Landau), on how electricity can reanimate a dead frog’s muscles gives Victor the idea to try it on his long lost companion.

After digging up Sparky from the local pet cemetery, and with a little help from a convenient thunder storm, Victor is able to revitalize his beloved terrier — but he must keep it a secret, especially since he lives next door to the grumpy Mayor Burgemeister, who finds a reason to dislike everything. However, Victor and Sparky do get to hang out with Elsa Van Helsing (Winona Ryder) and her poodle.

Sparky’s miraculous resurrection doesn’t stay a secret long after schoolmate Edgar E’ Gore (Atticus Shaffer) learns about it and tells other classmates who all want an undead pet of their own in the science fair. Well, their monstrous creations don’t turn out as lovably adorable as Sparky did and they soon are out terrorizing the town. It is now up to Victor, Sparky and their new friends to stop the rampage before the town turns into a riotous mob, out to destroy everything different, including Sparky.

Everything about “Frankenweenie” shows how much time and care went into the film. Yes, it is about a child bringing his dead animal back to life, but it is also about the love between them and Victor’s journey to understanding and accepting tragedies that have occurred. The movie is filled with tons of hidden — and some not so hidden — tributes to monster movies of the past, from characters’ names, to even posters on the wall of Victor’s room. They all showcase the love Burton has for these classic films and possibly what inspired him to turn away from his classic Disney beginnings and start to use his own unique vision of film making.

While some of the content in the film isn’t for some younger viewers, the movie overall is funny and has a lot of humor infused into the darker subject matter. I was afraid at first that a completely colorless animated feature wouldn’t be able to satisfy kids, but I was wrong. I don’t even think that the children in the theater even noticed after the first few minutes. The addition of really great 3D was an added bonus and while there are a few jump-out moments, Burton uses the 3D to enhance the world, not make it a gimmick. Plus, a beautiful score by the talented Danny Elfman really enhances the film.

Between the comedy and immersion in a world that seems slightly similar to Burton’s last stop-motion animated feature, “Corpse Bride,” the movie was very entertaining and showed a lot of heart. You root for this boy and his dog — even though it is an unnatural thing — and you want them to be together.

A veteran cast of actors – some of whom played many roles in the film — made the movie flow very naturally. While the premise of this story-line is well-known, the journey is a new one you should embark on and discover for yourself. While Tim Burton fans will revel in seeing his signature style, many others will appreciate the artistic heart and soul of this film, which boils down to the love between a boy and his dog.

You can check out six clips from the movie HERE.