Review: Ghosts of the Ozarks 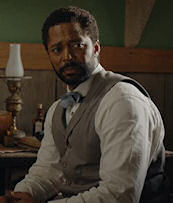 James McCune (Thomas Hobson – “Stone Fruit”) is making his way alone on horseback through the forested Ozark Mountains of northern Arkansas. He is headed for the town of Norfolk, by invitation of his uncle, who describes the town as an oasis in the troubled times. McCune, a black man, is a doctor who served the Union during the Civil War and has been recruited to replace the Norfolk doctor. The time is shortly after the end of the war in which Arkasas fought for the Confederacy.

Taking a break, he dismounts, only to have his horse run off. He continues on his way through the forest on foot, finally settling for the night. A threatening white stranger appears out of the dark and, when he attacks McCune, is violently pulled into a swirling red mist. McCune staggers through the darkness, finally arriving at the walled village of Norfolk.

So begins a tale of mystery, love, and betrayal in the forbidding hills of 1860s Arkansas.

At first, Norfolk seems to be a utopia in which all share the benefits of community, are protected, have purpose, and live in harmony regardless of race. McCune’s uncle Matthew (Phil Morris – “Trek Untold”) runs the village with an intelligent, paternal hand – or so it seems. He waxes eloquent to his nephew about the wonders of Norfolk and how only here could a black man be valued as he should.

However, even this postbellum utopia has its horrible secrets and veiled brutality. These things gradually become apparent as the “Ghosts” mete out punishment to those who threaten Norfolk’s balance, even in minor ways.

McCune is befriended by Torb (an unrecognizable Tim Blake Nelson – “Oh Brother Where Art Thou?”) the blind bartender and proprietor of the bar and rooming house. He also meets the lovely Annie (Tara Perry – “12 Hour Shift”) and afflicted William (Joseph Ruud – “Black Rain”), who live outside the village walls and provide meat for the settlement. Annie quickly becomes a romantic interest and begins to describe the reality of Norfolk.

Director/Writer Jordan Wayne Long (“12 Hour Shift”) tells a taut story about an insular community where secrets lurk just below the placid surface and eventually explode into view. He gets excellent performances from his principal cast, but less so from the minor characters. As writer, he and his two associates have created dialogue rich in the slang of so long ago. There are gaps in the narrative however, which create questions never addressed. While the “Ghost” special effects are minimal, they are handled with expertise and are frightening.

All in all, this is an enjoyable minor yarn about paternalism run amok.