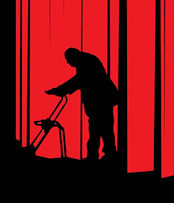 Mikhail Gorbachev has been out of power for 30 years, so it would be useful to begin by identifying him. He was the General Secretary of the Communist Party of the Soviet Union from 1985 until 1991. As such, he was the eighth and last leader of the Soviet Union. At 54 years old, he was also the youngest to assume power since Joseph Stalin did in 1922.

In 2020, a very frail 89-year-old Mikhail Gorbachev was interviewed by Vitally Manskly at Gorbachev’s home outside Moscow. The result of this and subsequent interviews is the documentary “Gorbachev. Heaven,” written and directed by Manskly.

The film opens with images of the empty rooms of a large, well appointed house. A cat strolls casually across the parquet floor. A vacant dining room has seating for 20. We first see Gorbachev as he dozes before a video screen extolling his triumph in changing the Soviet Union from an empire holding over 280 million people in totalitarian bondage (and scores of millions more in Eastern European satellite nations) into an open, economically pragmatic, fledgling democracy. He was a man who changed the face of the world, and was awarded the 1990 Nobel Peace Prize “for the leading role he played in the radical changes in East-West relations.”

But that was long ago. Now, he is an old man barely able to rise from a chair, using a walker, assisted by two servants and an assistant. He lives alone in a government supplied house without his wife, Raisa, dead 25 years, his family who now living abroad, or even the respect of the nation he freed, who gives him a less than 1% approval rating.

How this transformation? Manskly is here to dig into the history and motivations of the man. Gorbachev is alternately charming, puckish, bawdy, introspective, and silent as the questions are posed. Most he answers, some he ignores. When he is accused of answering some “cunningly” he doesn’t deny it. At times Manskly challenges his subject, disagreeing with a comment or posing questions about whether Gorbachev was successful in giving his countrymen freedom, and whether Russia is now a dictatorship. Despite this, Gorbachev is treated with respect and consideration for his successes, age and infirmities. The camera lingers lovingly over him in closeup, patient for long seconds as he formulates an answer, or gives none at all.

The interview at his home, and later at his Moscow office and at a 2020 New Year’s Eve party at the home of his assistant, covered a wide range of topics, including:
whether he is a communist or a socialist

Along the way, we are treated to Gorbachev’s recitation of pertinent poetic lines, and even the performance of a song his mother taught him. Included in that song, thrice present during the film, is a reference to a thick green forest being “Heaven.” Perhaps the thick green forest of memory is the heaven of this documentary’s title.

Throughout the latter portion of the film, the image of Vladimir Putin appears in the background. The director cleverly juxtaposes the Russia of today with the Russia that Gorbachev hoped he was creating. He has no illusions about Putin being a dictator, but hopes that, in time, the Russian people will achieve the freedom he thought he was giving them.

Near the end of the film, at the small New Year’s Eve party Gorbachev attends in a Moscow apartment, Putin is on television giving an uplifting, family-centric New Year statement. After that, the Russian national anthem is sung including a reference to Russia being “free.” Gorbachev smiles, asking, “And who brought freedom?”

For those who lived through the period of history that belongs to Mikhail Gorbachev and the dissolution of the Soviet Empire, or who study it, there is much value here. For those too young and too impatient to listen to an old man’s reminiscences, this is a slow moving, even tedious recapitulation of events which appear to have no relevance to life today. This superficial assumption is wrong. 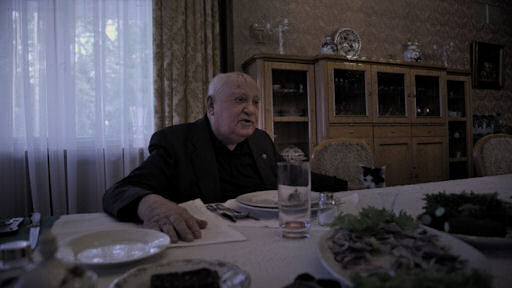