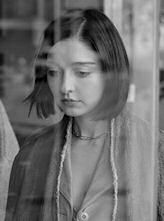 We live our lives in two parts, the one we want to live and the one others want us to live. We balance those two to meet practical necessities such as food and shelter. Maria and her daughter Leo did not get the memo on balance. To the extent of their control, their lives are the way they want them. They have an immediacy that is brought into gripping focus in this slow motion horror movie about people and nations in conflict and in crisis. Movie stars, rich politicians and business magnates come and go as human nature perseveres.

In post-crisis Spain, it is every man for himself and even worse for women. This beautifully shot film shows the small city Gijon getting along with a glacial recovery in merciless black and white. Repeated scenes of hobbled elderly shuffling, staring out windows into the rain and pushing wheelchairs through streets of dead and dying storefronts show us what the future holds. At least what it holds for unmarried women, and presumably all men, who similarly choose to live outside the norm. Their married male counterparts do not have it any better, scraping for pennies and trying to compartmentalize their moral failures. In Gijon, it seems to rain constantly in more ways than one.

Despite non-existent resources and non-existent futures, the two live a day at a time like the lilies of the field. The present is what counts and to hear writer/director Amalia Ulman tell the story one’s life is what one makes it until society pries the desserts, fruit baskets and fur coats from cold dead hands. Dark humor creeps from the cold streets, the even colder apartment and the cracks in the brick walls and social fabric of a failed economy. This is mixed with the geometric kaleidoscopic wipes, a mix of old B&W silent films crossed with “I Love Lucy.” Failure of opportunity is one thing and failure to dream something else entirely. The failure to laugh is unforgivable.

As mom Maria (Ale Ulman) shoplifts at a local dime store daughter Leo (film-maker Ulman) chats up the check-out guy and finds a date, something like love and then total disappointment. Caught shop lifting at another store Maria is not imprisoned, she is simply apprehended and sent on her way. This dismissal is worse than punishment as it dismisses Maria’s entire life. Granting her freedom to be beaten down on her own terms instead of the penny-farthing honor of having succeeded in some small, if illegal, thing that day.

As meals are put on the tab of a local politician, again, the waitress inquires as to whether the man with the charge account might be joining them for lunch some day. There are entire stories blossoming in our heads as each single one of these precious lines is dropped, willy-nilly, into the otherwise lethally dreadful task of living. Maria prints names on little papers and puts them in the freezer, freezing her enemies. Without money the power goes off and the freezer thaws. Look out for stormy weather.

As methodical and unpretentious as it is tragic and ironic, Ulman’s screenplay unfolds beautifully as crisply filmed by Carlos Rigo. The streets are as barren and cold as the human spirit is indomitable.