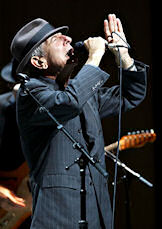 “Hallelujah” opens with Leonard Cohen, in signature black trilby, dark gray shirt and black trousers, singing “Hallelujah” for the last time. It is December 21, 2013. At one point he is on his knees, his deep voice reverberating in the charismatic verses and chorus. The audience is moved and I am weeping – but why?

For some, the now iconic song is about our fall from grace, beaten down by individual failings. Despair. Yet there is a repeating Hallelujah chorus of praise anyway. Perhaps this is a recognition of the extraordinary gift that life is in the first place and the perpetual chance we have for redemption when we mess it up.

But there are jarring lines, and references that don’t seem to fit. Many lines are obscure, a prior partner, angelic Dominique Issermann, says. I agree with her. “Hallelujah” is like contemporary art, leaving itself to the audience to interpret.

Haunting
The film takes us through Cohen’s life. At age nine he loses his father to a long, protracted illness. At that time he wrote his first poem, but it wasn’t until his 30’s that he wrote lyrics. Early on he says he was searching, plagued with a sense of disorder, chaos and depression. Writing was his vehicle.
Someone in the film comments that “Hallelujah” is one part God and one part the person he slept with last night. Larry Sloman, reporter for “Rolling Stone,” says the lyrics are about the holy and the broken.

Regarding his spirituality, Cohen says that “the only way to glue yourself to sanity is through prayer … There was a resonating presence in my heart, some sense that there was something that could be healed.”

Despairing
In the first lines, Cohen recounts King David’s and Sampson’s failed obeisance to God. They both fall into temptation to women/sexuality. We are not perfect and we are pulled by the very essences with which we were created. This is the human condition. Despite a desire to be good and pure, humans cannot attain perfection and there can be pain in that.

But that is my conjecture. Both Issermann and Cohen’s collaborator, John Lissauer, never asked Cohen what the song meant. Lissauer says, “I wanted to be the audience. I didn’t want to know too much. The art has to explain itself. It would be insulting the artist to ask.”

Cohen kept a series of journals for his songs and thoughts through time. Dan Geller and Dayna Goldfine, the filmmakers of this moving documentary, show us excerpts on “Halleluja,” revealing that there were well over 100 potential verses.

In an exchange with Bob Dylan, Cohen tells him that “Hallelujah” took seven years to write. Then he asks Dylan how long it took him to write one of his songs which he had just praised. Dylan responds, “15 minutes.”

Hopeful
In Cohen’s life as in his music, there is a cycle of renewal and growth, both spiritually and psychologically. This is mirrored in the tune and the words:

Now I’ve heard there was a secret chord
That David played, and it pleased the Lord
But you don’t really care for music, do you?
It goes like this
The fourth, the fifth
The minor fall, the major lift
The baffled king composing Hallelujah.”

The minor fall, like an individual fall in self-expectations, sickness or catastrophic event, can be followed with a possibility or promise for redemption (the major lift) or renewal. And that’s how it repeatedly worked out for Cohen. In his last act, at age 74, his manager had taken all his money, including his retirement funds. “Hallelujah” recounts Cohen’s reaction and rise.

In parting inspiration, after the film has revealed his life struggles, the filmmakers show Cohen seated alone speaking to the camera. He says, “You look around and you see a world that is impenetrable and cannot be made sense of. You raise your fists or you say Hallelujah. I try to do both.”