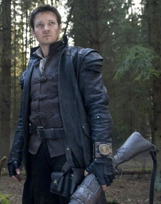 In recent years, there has been a growing trend in Hollywood to take classic fairy tales or children’s stories/movies and re-imagine them with a more adult-targeted story in mind. In the past few years, we have seen the fairest of them all get an edgier tone with “Snow White and the Huntsman” as well as Tim Burton’s vision of “Alice in Wonderland” in 2010. The trend doesn’t seem to be going away as we have many more recognizable fictitious characters getting ready to invade your local movie theater. In March, we will see the Jack take a trip up the infamous beanstalk to battle an ensemble of Giants in “Jack the Giant Slayer,” as well as a return to OZ in Disney’s “Oz the Great and Powerful.”

The latest and greatest tale to get this dark twist and hit the theaters is Paramount’s “Hansel & Gretel: Witch Hunters,” based loosely on the characters established in 1812 by the Brothers Grimm. We see the tale of the poor siblings Hansel (Jeremy Renner) and Gretel (Gemma Arterton), who are seemingly abandoned by their parents in the dark forest when they come across a house made of delectable treats. Inside the house lives an ugly witch who captures and attempts to eat the children. Luckily, they defeat her and word spreads of these brave kids and so they eventually begin to hunt down and kill witches – for a hefty bounty of course.

All grown up now, they head to a village that has had more than 10 children taken, sometimes openly and during the day. This doesn’t seem like normal behavior for your average witch and as they begin to investigate and interrogate every practitioner of the dark arts they can find, they soon begin to realize that they aren’t dealing with any ordinary witch in their foe, Muriel (Famke Janssen). She is a “Grand High Witch” and all of their skills and special abilities might not be enough to garner victory this time.

Their progress is impeded by the town’s nasty sheriff, Berringer (Peter Stormare), who wants to rescue the children, mostly for the reward and the praise. With many enemies, unlikely friends and an enchanting mystery, this dynamic duo will find out if they have what it takes to pull off the ultimate witch hunt.

Just like last year’s “Abraham Lincoln: Vampire Hunter,” you must go into “Hansel & Gretel: Witch Hunters” with a certain level of reality turned off and just enjoy the ridiculousness of it all. If you attempt to watch this movie as a straight-forward action film, you will be incredibly disappointed, even the movie knows not to take itself too seriously and at times even seems to be mocking itself. Yes, there are story loopholes and certain things that don’t seem to make sense, but if you know going in what you are in store for, it can be enjoyed.

Having said that, while there isn’t one main aspect of the film that seems to be missing, I found it a bit dull overall. Don’t get me wrong, there is some fun action in the movie, but at less than 90 minutes and with a very long opening title sequence, there isn’t enough time to develop the characters as well as they should have been.

For what it’s worth, the acting in the movie is fine; Renner and Arterton have good chemistry and appear to be a very close brother and sister duo. There aren’t many side characters worth mentioning — since none of them are in more than a few scenes — but I will say that one of the most interesting parts of this film are the witches and each of their unique designs. Famke Janssen is amazing, as always, but then again I have had a crush on her ever since she was in the X-Men franchise. She is fun and evil, but the many other witches we encounter in the film are all unique and seem very distinct. The use of 3D in this film is laughable, which is weird to say since this was filmed in the format and not post-converted, but there was no use of depth and I counted how many times they really used the medium –which was under 10.

While the movie does remind me of “Van Helsing” in its overall tone, it is rated R for violence, gore, language and brief nudity. I do think there could have been more action and violence if the film was longer, but the strange thing is that the foul language seemed oddly out-of-place to me. Normally, I don’t even notice language as I am immersed in a movie, but there were three or four times they used foul language and it didn’t fit the tone of the film. That was weird to me and I wonder if that was there way of guaranteeing themselves and “R” rating and therefore securing a larger adult and teen crowd?

Paramount Studios pushed the release date of “Hansel & Gretel: Witch Hunters” from March 2012 until now in hopes of Jeremy Renner’s star power being boosted by his starring roles in the 2012 blockbusters “The Avengers” and “The Bourne Legacy.” But seeing as “The Bourne Legacy” wasn’t a critical success and his role of Hawkeye doesn’t draw as much attention as Robert Downey Jr.’s Tony Stark, there is a question of whether the studio made the right move. My answer is yes, because even though the box office numbers won’t be enlarged that much in light of this release date change, this movie belongs in January when people are focusing on all the award shows and Oscar worthy films and it will have a core audience of fans specific to either the genre or its stars.

Even though Will Ferrell produced it, the humor doesn’t stand up to the over-the-top style of comedy we are used to seeing from him and even though it has laughable moments, I don’t think it was always intentionally.

In summary, see the film if you really want to, know what it is going in and don’t pay the 3D surcharge, you don’t get your money’s worth.