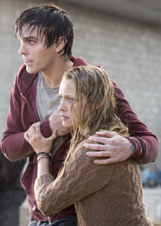 Forget vampires, with the huge success of “The Walking Dead” zombies appear to be the latest craze and this year we will have two zombie flicks. “World War Z,” directed by Marc Forster and starring Brad Pitt, will hit theaters this summer on June 21 and “Warm Bodies,” based on the novel of the same name and helmed by Jonathan Levine with Nicholas Holt in the lead role, opens tomorrow. The former is more of a traditional take on of zombie-lore, where as the latter is a love story.

I know what you’re thinking. A zombie love story? How does that work? I thought the exact same thing. The whole idea sounded implausible; ridiculous, in fact. I mean, zombies are dead, right? They eat brains. There’s nothing lovable about them. However, the very idea of a zombie falling in love intrigued me. So, I went into the screening with an open mind and was pleasantly surprised.

“Warm Bodies” takes the typical boy meets girl, boy loses girl scenario and makes something clever and original out of it, while breathing new life into the zombie genre at the same time. The film, starring Nicolas Hoult (“About a Boy,” “X-Men: First Class”) and Teresa Palmer (who is much better in this than her one-note performance in “I Am Number Four”), is about a teen-age zombie who longs to connect with someone but he can’t because he’s well … you know … a zombie and so is everyone else that resides along with him inside an abandoned airport. But that doesn’t stop him from trying.

You see, R (Hoult), isn’t your typical walking corpse. Unlike the Bonies which are disgusting looking skeletal creatures that devour anything with a heartbeat, the breed of zombie R happens to be isn’t as far gone. As demonstrated in the four-minute preview Summit released a month ago (which you can see HERE), where R appears to be having a stimulating conversation with his best friend M (Rob Corddry), his kind is somewhere between dead and alive and can communicate to one another. But even with these human characteristics, they still have a craving for brains.

In the need to feed, R leads a hunting party into the city and stumbles upon a group of humans in a deserted pharmacy. There to gather supplies are Julie (Palmer) and her father, General Grigio (John Malkovich), her boyfriend Perry (Dave Franco), Nora (Analeigh Tipton) and a few others who are the equivalent to the red shirts in Star Trek.

R falls instantly in love with Julie as she unloads a gun on himself and his comrades. Unfortunately, she becomes overwhelmed by the attack and is quickly outmatched. But in Edward Cullen-like fashion, instead of feeding on Julie, R races in to save her. Thankfully, any comparisons to “Twilight” begin and end there because “Warm Bodies” is better and funny where it’s intended to be.

Speaking of humor, thanks to Rob Corddry’s amazing comedic timing and delivery, M steals a few scenes as does Tipton as Julie’s bestie, Nora. Malkovich was also good here but he wasn’t given much to do. Since “Red 2” is on the horizon, I was okay with that. Plus the main plot of “Warm Bodies” revolved around R and Julie and how love can change a person – or a zombie.

Interestingly enough, in the same vein as “Warm Bodies,” BBC3 is jumping aboard the zombie train with a drama titled “In The Flesh.” The series, which will debut later this year, follows Kieren Walker and his reintegration back into both the local community and the heart of his family after his death four years ago.

But before you watch Kieren, I implore you to embrace the absurd and give this whacky and charming movie a shot. Not only will you be glad you did, you’ll see zombies in a whole new light.