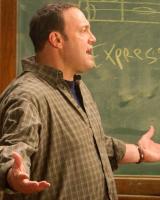 Kevin James has been a staple in family comedy films the past few years, collaborating with Adam Sandler’s productions multiple times, and has really cemented himself in that role. The only problem is that I don’t like that mold. His performances in comedic films prior to “Grown Ups” or “Paul Blart: Mall Cop” were the essence of who he is, which less riddled with an abundance of potty humor and lackluster characters.

Now, James is back and re-teaming with his “Zookeeper” director, Frank Coraci, for “Here Comes the Boom,” and although this film seems family friendly by being rated PG, it still feels like it’s his first movie for adults in a long time.

While there are traces of the juvenile friendly humor — Adam Sandler did produce it after all — with James sincere performance and a great supporting cast, the pros outweigh the cons in “Here Comes the Boom,” which is a suitable film for the whole family.

Scott Voss (Kevin James) is a 42-year-old Biology teacher, living off his glory days as a wrestler in college and a “Teacher of the Year” award he won a decade ago. These days, he has lost his focus and passion for his job. Constantly arriving late to his job and butting heads with the school’s principal (Greg Germann), it is obvious that something is missing. Scott does seem to get inspired by his friend and co-worker Marty Streb (Henry Winkler), who is so passionate about his music class and making his students into musicians.

When the school announces cuts due to an inadequate budget, the first program to go will be the arts, including the music program. Scott speaks his outrage and learns that it will cost $48,000 to save the program and his friend’s job. Not knowing how he will be able to help, he promises that he will help raise the money, but it doesn’t appear anyone else cares. In fact, only one other faculty member shows any interest in helping — Bella Flores (Salma Hayek), the school nurse and the unrequited love of Scott who constantly turns down his requests for a date.

With no clear plan, Scott begins to teach a night class to immigrants who are hoping to pass their citizenship test. That’s when he meets Niko (Bas Rutten), a former MMA fighter and now an instructor in different forms of fighting. Scott learns from Niko that even the loser of a match gets paid big money and then he gets the insane idea of participating in various amateur tournaments to help raise the money. Scott asks Niko for help, and although he is opposed at first, Niko agrees to start training the out-of-shape educator.

Along the road to building a better body and a better chance at winning, Scott begins to find himself, his enthusiasm for teaching and for his life once again. As he begins to win, Scott is offered bigger fights by even tougher opponents, but will happen when he is offered a fight with a true killer and No. 1-rated fighter in the sport? And will he be able to pull off the nearly impossible task of raising all of the funds to save the music program?

“Here Comes the Boom” is a mixture of “School of Rock,” “Warrior” and “Rocky” that uses Kevin James’ good guy persona to advantage in shocking the audience when he actually begins to fight. Although it is only rated PG, the fights are intense and while James continues to take beatings with each new match, there is lots of blood, which could be alarming to small children. The action is intense at times, but there is still much comedy in the film. The actors are used to their full potential by having each one do what they are best at, and that helps the movie rise above a somewhat mediocre script.

While the film does seem to go along the lines of many of its predecessors, there is still genuine heart to it and it is the performances that save it. The romance between Kevin James and Salma Hayek was not very believable, but the friendship between them and Henry Winkler’s character was. You see a friendship and bond that helps expel some of the faults of the film. “Here Comes the Boom” doesn’t completely escape the unsophisticated pandering to the youths, but there are a few gags in the movie that are best suited for a Nickelodeon Channel film, those moments quickly pass and we get to focus on the journey of our main characters.

The movie was shot beautifully and had a great perspective to the fights, up close and personal, so you could feel the brutality of it all. I was really impressed with the great shape that Kevin James got in for the role. Normally, he’a very funny rotund man, but he really took the role seriously and slimmed down while also amassing some muscle. He looked more solid and muscular than I have ever seen him before, which shows me the level of commitment he had to this project.

While not a total grand slam of a hit, “Here Comes the Boom” is the best movie I have seen Kevin James in since “Hitch.” They utilized what he is known for, but then add a completely new dimension to him that we have never seen.

“Here Comes the Boom” isn’t as intense as “Warrior” or as funny as “Hitch,” but it holds many of the same strengths and finds a happy medium, making it appropriate for nearly everyone to watch. It might surprise you how much you enjoy it, because if you see it I am sure you will be cheering for Scott Voss by the end of the film.

“Here Comes the Boom” opens in theaters today and is rated PG for sports violence, rude humor and language.