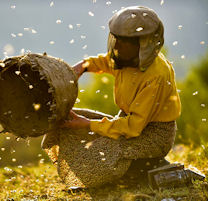 Simplicity and elegance combine to make a powerful statement in this microcosmic visit to a Macedonian Honeyland. A simple documentary about rural bee-keeping morphed into a wild drama of capitalist commercialism and environmental common sense. One of the best documentaries of the year, and perhaps the decade, this tale has the hallmark of a simple story that took on a life of its own. A piece of journalism that, through a twist of fate, became a fable for our times.

Hatidze Muratova is off the grid in the wilderness of Macedonia. She lives in the ruins of a village with her aging, infirm, mother who she cares for constantly. The two women have no utilities, live on porridge and appear to own only the clothes on their backs. The miniscule money they need, approximately the average monthly cost of coffee at Starbucks, is supplied by honey Hatidze cultivates and sells in the capitol city Skopje.

The cinematography uses the stark, rocky, semi-desert surroundings to emphasize how little the two women are compared to their world. There is no soundtrack, the stone silence is broken only by the buzzing bees and the bee-keeper’s murmurs as she collects hives from cliff-bound rock nests. Gathering the bees, unprotected by netting, she exclaims wonder and thanks to them and to the land. Transported to stone clefts in the crumbling walls of the deserted village huts, they are left to pollinate the dry grass and make honey. Hives of dried mud are capped with steel army helmets left by soldiers who, one imagines, no longer need them.

When Hatidze removes the honey, she repeats a mantra that is as regular as the rise of the sun and moon. “Half for me, and half for you.” Half goes into jars that she sells and half goes on the rock outside the hive, to feed the bees while they reorganize and rebuild the damaged hive.

Walking to the big city, Skopje, she is from another time, another place. Some buy her honey, acknowledged to be fine, for a pittance. She does not care much about the price. The hustle and bustle of the market are more amusements than mandates. Smiling, she buys dye for her hair and a fan for her mother.

In the midst of filming the original low-key documentary about Hatidze and her bees, the arrival of the Turkish Sam family is like Barnum and Bailey coming to 1880’s Wichita. Itinerant cattle drovers with sickly cows, broken down trucks, a leaky travel trailer and seven children, their arrival is boisterous and funny. One can only imagine directors Tamara Kotevska and Ljubomir Stefanov rolling their eyes and resigning themselves to wrap the project, or wait out the Sams like a bad winter.

Urged on by an enterprising middle-man, husband and father Sam begins raising his own honey to make more money. Well-meaning but hopelessly ignorant, he fails to follow Hatidze’s example. The resulting train wreck is that miraculous stroke of luck when a documentary spins out of control, making magic.

The first impression is “How can anyone live on so little.” The lasting lesson is “Sometimes having little is having everything.” 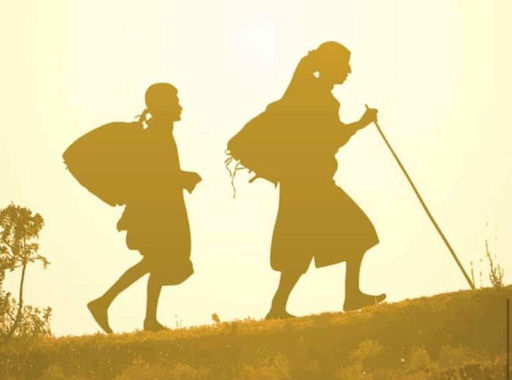