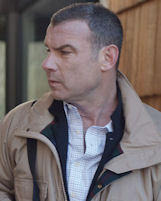 Uncorking a big one, emerging director Marc Meyers spins a dynamic web of stories and viewpoints. The performances are there, with the chemistry between Liev Schreiber, Marisa Tomei and Peter Sarsgaard steaming off the screen. Even so, the viewer has to pay close attention; sometimes finding it difficult to impossible to fill in the missing links.

Fans of Schreiber’s tough guy fixer “Ray Donovan” TV series will appreciate the casting that brought him here. The first shot of him pulling up to a mysterious ultra modern mansion on too many leafy acres of upstate New York summons memories of trouble in high places. Oren Moverman’s screenplay (based on the novel by Stephen Amidon) ups the ante as we are jerked into the new reality. Schreiber is not a smart, tough super-fixer but Drew the plodding office worker. Clambering to the bottom rung of the upper crust, he is barely holding on.

His past history of compulsive gambling is a luscious dish, but one of several unneeded complexities. Ronnie, his loving and attractive second wife (played by a solid Betty Gabriel), tells him twins are on the way, a signal to the audience that he needs a big score. In a nice turn of plot his sullen daughter Shannon (Maya Hawke) lets us know his breakup with his first wife was not a pretty one. His banker underscores this skeleton by almost coming to blows over falsified loan documents. This better work.

Thank goodness it does not. Sleazy hedge fund hustler Quint Manning (a superb Peter Sarsgaard) and redoubtable lacky Godeep (Aasif Mandvi swallowing his pride) quickly lose everything and Meyers and Schreiber make sure we know it as Drew watches his new rebuilt life and fragile second chance go down the drain of Wall Street’s wet bar.

Anchoring a host of great supporting performances, Marisa Tomei emerges as pivotal has-been actress and theatre impresario wannabee, but the screenplay plays hard to get with her contribution. With so many moving parts (her mother as Alzheimer’s victim) the viewer could have used the break of having her role as lady of the house nailed in the opening scenes. In fact, tycoon dirt bag Quint’s house does not even look like a house, but more like a country club.

Small details detract from the excellent tension and enthralling acting by forcing too much gear grinding to keep track of goings on. The third story about a drunken hit and run by one of the kids is told in flashbacks that are so smooth and unannounced that they are not confirmed as flashbacks until a couple flashbacks later.

No matter, the screen chemistry between the three leads, Schreiber, Sarsgaard and Tomei carries the day. A masterpiece of casting and a good introduction to several young performers.

Possible Oscar nod for Aasif Mandvi as Godeep, best hubris lightning rod of 2020, and best character name Godeep for a plan that goes deep in all the wrong ways.