Review: Is the Man Who is Tall Happy? 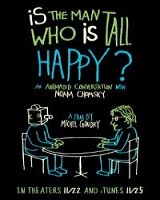 Yes, it may be impossible to consider the consequences of describing a river that becomes a highway, or of attributing possession of a ship that has been completely reconstructed or of converting the title of this film from a question to statement by moving the first “Is” to near the end instead of using it to replace the second one. Even if it is impossible, the ever game Michael Gondry has achieved the impossible; a cogent, nearly understandable interview with language master Noam Chomsky.

Better known for nearly being thrown in prison for his anti-Vietnam War activities than for his complex and largely inaccessible concepts of language, Chomsky comes clean in this brief narrative and gives the dedicated viewer a glimpse of what lies in store if they buy one of his hundred books. The crucial question appears to be innate language transmitted genetically as opposed to purely learnt language. Chomsky argues that there is too much in language for a child to learn in the time they learn it. Some, or most, of the basic structure (syntax) must already be in place. All the child has to do is fill in the blanks with real life experiences.

Putting that aside, the more interesting aspects of language might have to do with ownership and possession. In the case of Theseus’ ship, Theseus departs for a cruise during which his ship falls apart and pieces are replaced one by one until the entire ship becomes the sum of replacement parts. Is that still Theseus’ ship? If the parts have been collected and used to build a new ship somewhere else, is that Theseus’ ship? After all, there cannot be two Theseus’ ships.

The invitation to pretzel logic that is Chomsky’s part of the film is counterbalanced by Michel Gondry’s animated video stream and his equally animated interview. Perhaps Gondry thought of this approach after getting to know about Chomski’s attachment to his primary school, a Dewey School.

Although the Dewey school adopted decidedly different methods and rhythms of education, the key principals on non-competition and constant questioning come to the fore. The non-competition leads to Chomsky’s rabid opposition to anything remotely smacking of authoritarianism, or authority of any kind for that matter. 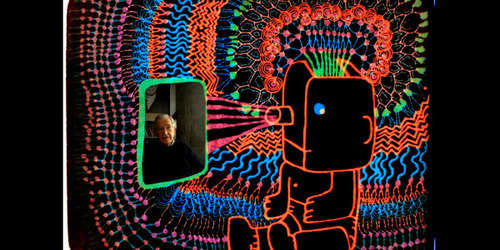 One take-away is that language should be regarded as an inherent simplification of reality, and not taken too seriously, or at least used with a knowledge of it limitations. Just because we can create a syntax that equates control to ownership and back to control, this does not mean we actually have control. If we are learning nothing else at this point in time, we should understand that our so-called ownership of the earth is not helping us control its climate.

If it is true that ownership is as shifty as the sands beneath our feet, most of our so-called laws regarding property fall apart. This brings us to anarchy, the social norm favored by the subject. The role of the dean or head of Dewey school in keeping order is not addressed by Chomsky. Maybe such order was not required or it was done in the background or, it was simply ignored by those who wanted to ignore it.

The more interesting question is whether the star of the film, author, scientist and philosopher was born an anarchist or was taught to be one at Dewey. Gondry’s video is a series of hundreds of hand-drawn cartoons, each building on the last in a dizzying multiplication of figures and concepts. The playful and cartoonish video helps the viewer to take it slow with the speaker’s complicated and controversial concepts. Gondry has no problem being the child student sitting at the feet of the master.

A film that is either pretentious or genius depending on the whim of the viewer, this story is nothing if not encouragement for the curious mind. An interview by a curious man, of a curious man, for all to see. 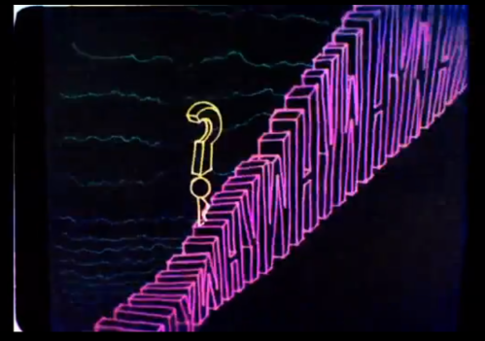 Tags: "Is the Man Who Is Tall Happy?", Michel Gondry, Noam Chomsky
Posted 02 Dec 2013 by Ron Wilkinson in Reviews