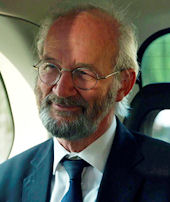 The island of Ithaka symbolizes home: the end of the journey, the goal of the mythic trek. As such, it is taken from Homer’s “Odyssey.”

The film “Ithaka: A Fight to Free Julian Assange” begins with the words of Nils Melzer, UN Rapporteur on Torture: “Torture is a tool used to send a message to others. It is most effective when it is used in public.”

So begins this film about the fight for the release of Julian Assange. This is not a film about Assange himself, or about Wikileaks, the organization he co-founded to shed light on the criminal behavior of nations which seek to hide their crimes behind the walls of “national security.” If the Nazis had been half so clever as the CIA, the Nuremberg Trials would still be going on.

We are introduced to the situation of Assange and the battle to bring him to the US to face espionage charges, with his forcible removed from the Ecuadorian Embassy by the British police in 2019. He’d lived there for seven years, having been granted political asylum. The removal was permitted after the election of a new president of Equador.

Julian’s father, John Shipman, arrives from Australia. For the bulk of the documentary we follow him and Assange’s lawyer/lover/and eventual wife, Stella Moris.

The film is really the journey of John, Stella, and others as they work on the outside to influence public opinion in England and Europe, and battle the political machinery that keeps Assange in custody while the UK and US governments work to deliver him to the United States to face up to 175 years in a maximum security prison. His crime? Releasing evidence of American war crimes, government corruption, and CIA abuse of information. In addition to fighting in the courts of legal and public opinion, his family tries to keep Julian’s depression from overwhelming him.

John Shipman is a complex figure. Physically, he looks very much like what he is – an older version of his son. He suffers from autism (as does Assange), describing how it wasn’t until the end of his 20s that he learned how to relate to people. He has a depressive side to his personality, had little to do with Assange’s upbringing, and is a soft spoken, philosophic man.

We follow John, his other son Gabriel, and Stella as they face legal successes, failures, and successes that mask failure, on this true odyssey for all of them. Will they ever reach Ithaka, as did Odysseus after his 20 year journey, or will they and Julian founder on the rocks of implacable forces seeking to make this case a warning to others who might seek to expose the crimes of the militarized state?

Odysseus had his gods and monster to overcome, and there are monsters at play here, too:

• Former President Barack Obama, who waged unceasing war on whistle blowers during his administration.
• Mike Pompeo, who served as head of the US CIA and then Secretary of State during the Trump administration. Pompeo organized attempts to either kidnap or assassinate Assange. He has been charged with personal corruption in office.
• Priti Patel, who is the UK Home Secretary and personal friend of Mike Pompeo. She authorized the extradition of Assange to the US shortly after entertaining the ex-Donald Trump administration member in her official capacity, as if he were still Secretary of State.
• Gina Haspel is the recently former head of the US CIA (replacing Pompeo). She served as chief of a “Black Site” used to torture and interrogate illegally-held CIA prisoners, and destroyed video tape evidence of the same before being rewarded with the CIA leadership.
• President Joe Biden, who continues the political vendetta and legal harassment on the part the United States. Biden bewails the use of political prisoners and threats to human rights, but supports apartheid and authoritarian regimes while maintaining the persecution of Assange.

The subject matter is handled tenderly and intelligently by writer/director Ben Lawrence. As stated before, he has shifted the narrative from Assange directly to the family members who struggle to bring him home. This struggle is an eternal human story, relevant regardless of your opinion of Assange and Wikileaks.

Whether John, Stella, Gabriel, Julian, and the many everyday people who see this as a battle for free journalism and government accountability will be able to maneuver around the obstacles powerful, unaccountable people place in their way is yet to be seen.

The film ends on an equivocal note. John Shipman, now in his 70s and with a young child of his own back in Australia, is deathly tired of the whole spectacle, but sees no option other than to carry on.

Throughout, the original music by incomparable composer, Brian Eno, adds to the emotional impact. The editing, assembling many many bits of video from numerous disparate sources is excellent.

Regardless of the viewer’s opinion of Assange himself, this documentary is highly recommended for technical and excellence and human compassion.