Director Pablo Larraín and writer Noah Oppenheim took on a prodigious task when they chose to recreate Camelot in the 21st century. In a way, it was a hopeless task, like asking an actor to play Hitler. Nobody can duplicate the real thing because one simply had to be there. The result of their effort is nice try, no cigar, but perhaps an inspiration to learn more. JFK’s and Jackie’s earth shaking popularity ensures the true story will never be known, but there are archives being released now that shed light. 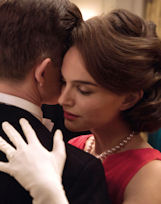 There is good news and bad news. The weakness of the movie is the casting. The good news is that 90 percent of the folks who were there and saw the real Jackie, and John, are gone. Part and parcel of knowing Jackie is knowing the times and the culture of the presidency and the Kennedy clan. Jackie had no clan, at least none she wanted in the newspapers. She was the underdog from day one and the more the viewer appreciates that, the better the movie is.

Natalie Portman probably prepared long and hard to be Jackie. There is no lack of archival material for her to reference, especially that which was released in the last 10 years. The costumes and sets are as perfect as money can buy. In some cases, such as the Lincoln bedroom, the sets have a dark humor all their own. The very concept of a woman becoming an international idol by giving a walking tour of a museum is unthinkable today. No pop music, no dripping diamonds, no special effects, and many Americans did not even have TVs. Yet, she became a princess. America’s princess.

Peter Sarsgaard plays Bobby Kennedy, a key role in the movie. He is a marvelous actor, as evidenced by his Golden Globe nomination for Supporting Actor in “Shattered Glass.” But in the role of the edgy, short tempered, aggressive attorney general Bobby, he just does not get it. Mark Walhberg would have been a better choice, someone who would have been biting his lip, pacing and sweating bullets instead of radiating bewilderment.

Greta Gerwig is funny enough even when she is playing desperately sad roles and when she comes on the scene as baby-sitting personal assistant Nancy Tuckerman, it is all one can do not to break out laughing. In fact, Gerwig herself seems to be smiling in some of the scenes, even though there are almost no scenes anywhere in this movie where anyone is smiling. Billy Crudup does a good job playing the journalist, unless he is supposed to be Arthur M. Schlesinger Jr., who interviewed Jackie in 1964 after the assassination. Crudup is no Schlesinger, but then, who would know? John Hurt plays the priest who councils the traumatized Jackie after the assassination and he pulls it off without a hitch.

Pitch perfect cinematography brings out the beautiful sets and costumes and the sound track works. If you see the movie, consider reading Schlesinger’s actual interviews as a follow-up.