Director John Madden has had better days. After great films like “The Best Exotic Marigold Hotel,” “Captain Corelli’s Mandolin” and “Shakespeare in Love,” this one is a clinker. 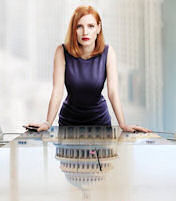 The direction is fine but the movie is terminally hampered by the screenplay of debut penman Jonathan Perera. During the crucial first quarter of the film, the audience is concentrating to the point of pain to separate the pepper from the fly droppings in the hyper exaggerated, sophomoric legal babble that machine guns them from the silver screen. The dialogue is amateurish, flippant and totally out of keeping with the high velocity legal talent supposedly represented at the big table.

Jessica Chastain does the best she can playing the titular Sloane, a world class lobbyist for the world class legal firm of Dewey, Screwum and Howe who jumps ship to join forces with the underdogs fighting for gun control. Unfortunately, the first part of the screenplay has her spouting so much nonsense that the viewer forgets how powerful she was in “A Most Violent Year,” a film in which she talked a fifth as much and was twice as strong.

Mark Strong plays the head of the firm representing the good guys and is simply flat. It is hard to believe this is the same actor who played such an earthshaking role in “Tinker, Tailor, Soldier, Spy” five years ago. The good news comes with John Lithgow playing hyper-fleshy congressman Ron Sperling who sells out to the bad law firm and commences to crucify Miss Sloane in a set-up congressional hearing. He is so overwhelmingly grotesque he makes Jabba the Hutt look like Justin Bieber. With every shake of his jelly-like jowls, we are rooting for him to get it. An Oscar nomination for best quivering weasel is possible.

In an excellent piece of casting, Michael Stuhlbarg is chosen to be sleazy sourpuss defense lawyer Pat Connors, nearly duplicating his fantastic performance as powerful but ultimately weak kneed gangster Arnold Rothstein in “Board Walk Empire.”

Most of the movie features iron maiden Sloane heading a group of young, beautiful and presumably, very highly paid Ivy League legal whiz kids. The failure of that casting is that the kids are just too beautiful and too stupid to be true. They look as if they walked right out of a series of underwear ads and into six figure salaries as New York power brokers. Then again, they can never get a word in edgewise because of Sloane’s perpetual jack hammer rhetoric.

The crucial scene in “Miss Sloane” comes at the end of the movie when she delivers a monologue about what is wrong with the world and what needs to be done to get things back on track, a la Ayn Rand’s verbiage in “Atlas Shrugged.” The knife is in and the twist is made, but by that time it is too late. There are no more brain cells left to decipher the miniscule message in the hackneyed, leaden, self-searching diatribe. The cellos come up with an ominous roar and we feel something is happening, but we do not know what it is. The camera does slow pans and even slower zooms trying to squeeze out every ounce of profundity. There, she says, I told you so. 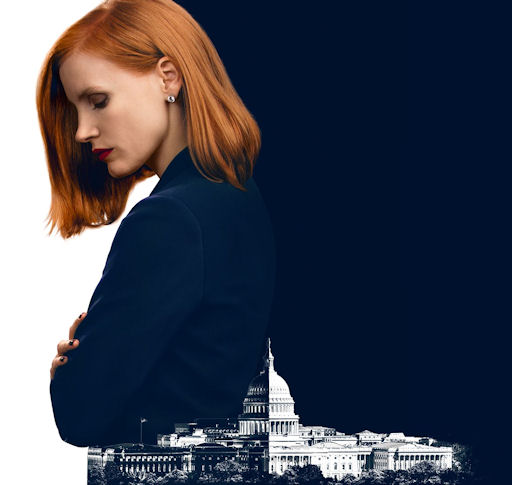