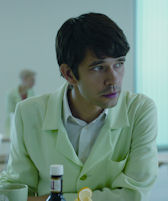 Alice is a bio-engineer who has created a plant with a scent that makes people happy. She wears a mask at all times while she is tending her creation that has been mass-propagated in a sterile, warm, locked, glass-enclosed test room. Why the high tech containment?

This little sci-fi film has been honored with 16 award nominations and a win at the Cannes Film Festival for best actress (Emily Beecham). Its brilliant writers, Géraldine Bajard and Jessica Hausner (nominated for best director at Cannes), have written a script that parallels fundamental and immediate issues in genetic engineering, parenting and happiness.

How Dangerous is Genetic Engineering?
And, how even more dangerous are genetically modified organisms (GMO) when aligned with capitalism? Alice (Beecham) breeds a sterile plant that produces a scent that makes people happy. It is sure to win recognition at an upcoming EU conference and bring vast wealth to the biotechnology lab that is the sole supplier. Everyone in the world will be wanting to breathe in happiness. It’s a sure-fire money-maker.

This is a thinly-shrouded parallel to the commercial GMO controversy. While 19 European countries currently ban genetically modified organisms, these specially modified seeds still create a fuller harvest. However, like Alice’s flower, the resulting yield is sterile. Farmers who once used the seeds from their harvests are caught hostage in a never-ending cycle of buying more and more expensive seeds from companies like Monsanto. But as weather, pests, and other biological agents attack the modified crops stripped of their original genetic code to defeat its natural enemies, there are also risks.

Alice, the top researcher who created the fragrant plant, is the single-parent of Joe, a bright young boy around 13. At the beginning of the film, he comments that he doesn’t get to see his mother enough because of her devotion to her job. As 21st-century women have become encouraged to follow their passions and careers, time to nurture and care for our children has been squeezed.

Strangely, though her precious plant project is being developed in a sterile, secure environment, Alice breaks a rule and brings one of the plants home for her son, Joe. She names the plant Little Joe. But is she endangering him?

At some point, a colleague asks Alice, “You are a good mother – but which of your children would you choose?”

Happiness
How this mood-lifting plant affects those who smell it is surprising. The question of why it does what it does is even more fascinating.

“Little Joe” is the 2019 winner of the International Science Fiction Best Picture Award and a disturbing look into the future of both plant and human. 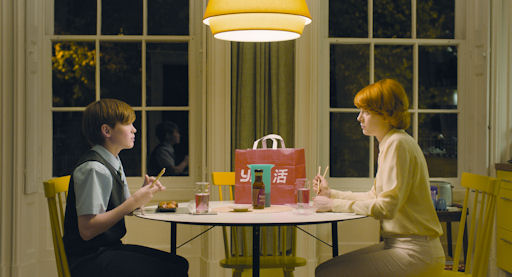