In his narrative feature debut, writer/director Ryan Prows shows some good stuff, but not enough to make this flick a success. It unabashedly copies the style of “Pulp Fiction” but does it to considerably reduced effect. 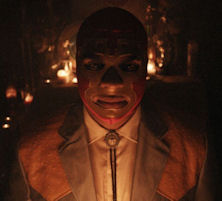 The movie opens in a great setting in what must be the seediest motel in the universe. There, a corrupt ICE agent who look hilariously like Frank Zappa flaunts his authority with élan. Lead actress Nicki Micheaux’s Crystal – showing a glimmer of genius – leaves her “Beverly Hillbillies” shotgun indoors. Thank goodness for that, as it avoids her being killed outright and plunging the movie into the all-to-serious world of senseless inner-city gunplay.

Jump to El Monstruo the failed super-hero luchador. A wonderfully yeasty conceit—there is more than enough potential in a professional wrestler tasked with saving the world to power a super script. A super hero, yes, but hopelessly bogged down in a world where things just do not work out. He failed to carry on the mantle of his legendary father, but now that his wife Kaylee is expecting, his child might be able to restore the family honor. Then again, maybe not, considering that Kaylee is a hopeless junkie who seems to have sold her soul, and perhaps other body parts, for reasons unknown. Unfortunately, the trope does not come off. As the luchador, Ricardo Adam Zarate gives it his best shot, but the screenplay is not there.

Plot elements float in and out with Tarantino insouciance, but Quentin told the story like it was his own life and Prows tells it like just a story. The setting is a marvelously seedy L.A., populated by suitably deranged and marginalized characters. Teddy (Mark Burnham bumping into John Goodman) is a vacuous and sufficiently harmless gangster who runs a fish taco eatery as a front. His business is murder, sex slavery and the sale of organs for transplantation. Again, the scene of indescribable body parts being harvested in a basement laundry room is great, combining classic Frankenstein with the “Pulp” basement assault ending in the Bruce Willis samurai sword solution.

Sadly, this Mel Brooks rapid fire absurdity is not maintained. Although the outcome is a choppy combination of the good and the bad, it is mostly predictable and boring. The viewer who goes along with the joke and rides through the slow parts will be rewarded with a decent tribute to a great genre, but one that gets marked up as a learning experience instead of a gut-busting good time.

Jon Oswald’s character Randy is back in town after serving 10 years of hard prison time taking a fall for his friend Keith. He comes on like a punk, but he is, in fact, a super punk. Emerging from the joint with his own special tat, a swastika that covers his entire face, he has a unique cross to bear. In the end he will become the unlikely hero in a way nobody could imagine. Funny enough, like Jeff Spicoli sprouting stigmata in Fort Lauderdale.