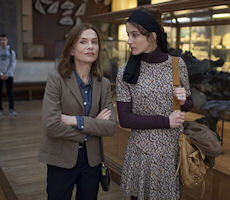 A cop dabbles on the wrong side of the tracks in a mix of Robin Hood meets “Butch Cassidy and the Sundance Kid,” threatening everything she has ever worked for. Growing up in a penniless Arabic immigrant household she is as determined as she is haunted by her father’s life as a low level gangster. Her mother survived the prison camps but is now bed-ridden and in need of money the family does not have. Working under cover, she puts on a tough shell as her collars denounce her as traitor and back-stabber, each one a ghost of her father. Then comes the mark she cannot betray because he is too close to home.

Isabelle Huppert plays Patience, a civilian translator working for the Paris anti-drug police. Her stage name being either a joke or a spoiler, or both, the magnificent Ms. Huppert plays this one straight. She has turned in a million perps when our story starts and she is solid with her boss and lover Philippe (Hippolyte Girardot, who plays it as straight as Ms. Huppert). Apparently workplace sex works better in France than elsewhere because that is not the crisis. Phillippe suspects monkey-business but is always lacking the final piece of the puzzle even as their love affair dissolves.

If neither of those two produces a searing lead performance, Nadja Nguyen almost steals the show as Colette Fo, the landlady who first bedevils Patience as the tight fisted rent collector and then shows a collaborative side she never imagined. Bad guys show up at the wrong time, men are killed and Patience exclaims “Should we call the police?” Fo’s dead pan reply “No matter, police never come to Asian community anyway,” says it all. There are police and there are friends and Patience is about to be clobbered with the difference.

As the caper movie either fumbles or intentionally ignores the moral details of killing people, not to mention sleeping with bosses, director Jean-Paul Salomé tells Hannelore Cayre’s novel in quick and entertaining shots that are always on the move, always on the verge of disaster and always perfectly framed and edited. While adeptly upping the tension in a set of skit-like sequences, Ms. Huppert is staggeringly beautiful, a walking denial of old age accomplished by being young at heart, and lucky. A slick slice of life, the almost-too-perfect cinematography matches the simple and sophisticated original music by Oscar-nominated Bruno Coulais.

The borderline lameness of the immoral robber making good is bucked up by well aimed jabs at marginal elder care and incompetent immigrant assimilation that seem to be today’s marching orders. There is a demand for intelligent, professional foreigners to be integrated into their new society and allowed to contribute. Easier said than done, as Patience, her mother and even the bad guys are sketched as little more than cartoons of typical immigrants.

If not promulgating big solutions, or even thrilling crime, devotees of Ms. Huppert will love her in this one, not to mention the remarkable supporting work of Nadja Nguyen.