Whatever acts of bloody violence Marlina may be guilty of, her crimes are nothing compared to the delightful twist director Mouly Surya has put in the neck of the spaghetti western. The lone cowboy, modestly dealing with laughably outrageous fortune with simple, terminal solutions, has nothing on this Indonesian widow. The trick is to exemplify karma in action without getting all egotistical about it. Rape me and you die. Steal my cattle and I steal your head. It is like meditation. In a way. 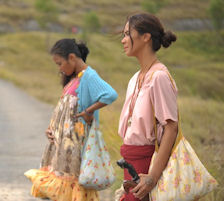 Beautiful loser Markus (Egi Fedly) thought about it too late and his head takes a road trip with Marlina (Marsha Timothy). First she is on foot, then she is on horseback and, finally, on his motorcycle. Marlina has evolved beyond the high plains drifter stereotype. She has embraced the brave new world of feminism. Waging guerrilla war on misogynistic victimization, she not only unmans her violator in the manner of the praying mantis, she rides out on the machine he came in on. Female partner in tow, cellphone in hand.

When Marlina’s house is invaded, her husband sits in the parlor, mummified and propped up against the wall, as proactive as ever, we assume. Alive, he symbolized the subservient relationship of his wife and thereby offered her effective, if demeaning, sanctuary. Dead, he is nothing but a debt waiting to be paid. There is no answer on the cell phone as neither modern society nor modern technology helps those who do not help themselves. Help comes, living better through chemistry. As Walter White gasses his first assailant in “Breaking Bad,” our heroine, pioneer that she is, plays the cards she was dealt.

At the police station, things do not get any better. As the officers play ping-pong, Marlina tells her story. This one is off the radar, falls between the file folders. Too busy to look into it now. Will check later. Your serve.

One can only imagine which of the three writers — Rama Adi, Garin Nugroho or director Surya — came up with the seed of this magnificent role reversal. Four acts, as the title implies, each one a gritty parable on taking life one day at a time and meeting injustice with, well, natural consequences. Although there is plenty of revenge action, Marlina does not exhibit a vengeful attitude. What happens, happens. Like a drought or a blizzard. Guard the well, seal the door, chop off a head.

The presentation of the movie, sight and sound, is so yeasty, fairly bubbling with dark humor, that the setting in the plains of Indonesia is hardly noticed. It could not be any more ridiculous than an American western set in Italy. Or, an American western set in Hollywood, for that matter. The total lack of regard for a believably false setting slaps us in the face. The score by Zeke Khaseli and Yudhi Arfani sounds more and more like Ennio Morricone, culminating in a twangy guitar that resonates oddly with the Middle Eastern tuning of Dick Dale’s surf music.

The sword is unsheathed as Novi’s baby is born. We have arrived. The film has bridged “High Plains Drifter” with “Pulp Fiction.” Get on that bike and ride.