The camera spins around a dizzying spiral staircase as shots ring out. Cut to an obscure, abstract play being performed in the apartment of a member of the ensconced elite. A stunningly sexy Adriana (Giovanna Mezzogiorno) is swept off her feet by the equally sensual Andrea (Alessandro Borghi). The sweeping seems to have more to do with her than with him. Adriana is desperately lonely, part of a clique of rich, intellectual women isolated by their IQs and their insistent dominance. She dreams of him and he is there. That is the last time she sees him alive and her job as a medical examiner takes on a life of its own.

This movie is everything you want an Italian movie to be. Donatello winning cinematographer Gian Filippo Corticelli has executed every frame as an oil painting and ensured that every place, and every face, has two sides. Adriana’s Aunt Adele manages to be beautiful in one shot and ugly in the next; pleasant in one shot and cruel in the next. She is like a mother since Adriana’s mother passed away, a murderous lunatic. Close to being Adriana’s mother. But that’s another story.

A mask sculpture is central to the plot. Reasonable enough, since almost everybody in the movie wears one. It disappears and reappears only to be revealed as a fake. Andrea has a twin but he is no substitute for the real thing. Then the real thing turns out to be less than genuine, but the twin has another side as well.

There is a poisoning, of all things. Just when you thought poisonings were yesterday’s trope. One here and one in the recently released “Marlena the Murderer.” Pascal, the corpulent, brainy and outrageously gay parlor philosopher, dies conveniently at lunch, managing to say only that things are not as they seem. By that time, we do not need that heads up. There is even a bed-ridden medium, contacting spirits in another world who seem remarkably well anchored compared to the heard of ditzy hangers-on fluffing her quilts.

Music is by veteran composer and multiple Donatello nominee Pasquale Catalano, simultaneously baroque and modern, summoning up the ghosts of bad dreams in every note and continuously blurring the border between rationality and madness. A good luck eye, a gem wrapped in gold, rolls around the floor. The detective from HQ strolls in and out, falls for Adriana (who wouldn’t?) and gives us what little actual information we are going to get. No matter. This is not a murder mystery, there will be no final revelations in the parlor. The revelations come for the rest of the characters’ lives. 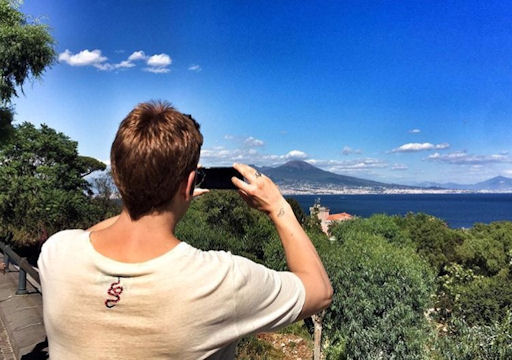