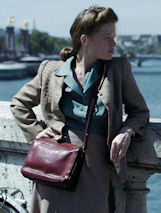 Just a couple of months before D-Day, Marguerite is contacted by the Gestapo official who arrested her husband, Richard. Ostensibly, he wants to know more about the Resistance movement Richard was a part of in exchange for information about him and potential leniency in his detainment. In turn, she becomes addicted to seeing him as he is the closest to her husband she can get. Yet, she is fearful he will discover that she is also a member of the Resistance and through her arrest its members.

Duras’s life and success as a writer and intellectual is sharply illuminated in her self-revelation as a woman conflicted by love, trauma, loyalty, and courage. The character of Marguerite, reminiscent of tragic-ridden Julie Christi in “Dr. Zhivago,” is played with building angst and conflicted courage by Mélanie Thierry as she chain-smokes her way through her all-male associations in the Resistance. Eventually, she becomes almost as thin and as emaciated as the prisoner she hopes still survives.

Award-winning director, Emmanuel Finkiel, gets all the pieces right in this remarkable treasure. The 1940 dress, environment, re-enactments and liberation of Paris are realistic. The acting by every character is stunning in its depth and thoughtfulness. But most important is the script, taken from the memoir of Marguerite Duras. She reveals her own inner conflicts, fears, and emotions that parallel the world’s own reaction to the Holocaust, with honesty, acknowledgment of complicity and attempt at compensation.

A celebrated writer, Duras, born in Indo-China, became famous in France as a writer, screenwriter, playwriter, and director. She had degrees in law and politics and for ten years was known as a radical leftist in the French Communist Party. “Memoir of War” is an exquisite tribute to a writer forever dedicated to a common good for all people. 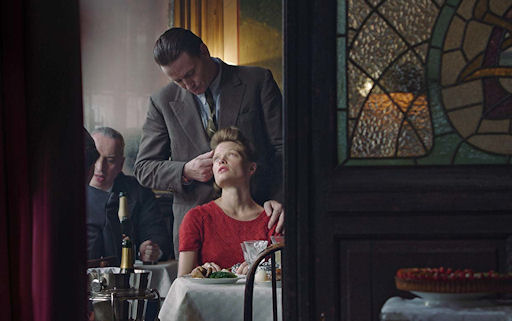 Based on the memoir by: Marguerite Duras